Set in a tuberculosis sanitarium in the Swiss Alps on the eve of World War I, Thomas Mann’s novel “The Magic Mountain” delves deep into the “feverish process of decay and repair” that is life.

In the century that has passed, the use of antibiotics made tuberculosis disappear from the modern world. But now a drug-resistant form of this horrible bug has appeared — and we have nothing in our medicine chest with which to fight it. Enamored of the antibiotics’ power, medicine has overprescribed them, making a new pandemic possible when the old strain of bacteria adapted.

But humans are resilient too, and we’ve known for decades about “good germs” that can resist or defeat “bad germs” in our bodies. The trouble is that industrial environments, antibacterial drugs and sophisticated medical procedures can kill off those good germs while letting bad ones grow unchecked. 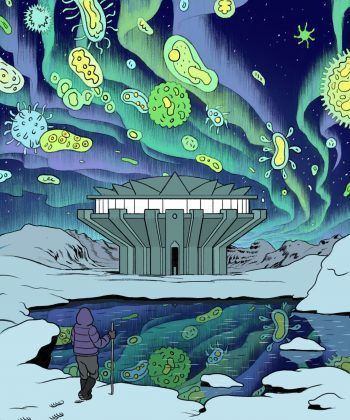 Last month, a team of scientists led by Maria Gloria Dominguez-Bello, a Venezuelan now at Rutgers University, suggested a source of new cures: Create a global microbe vault or system of vaults, perhaps where the climate is easy on refrigeration, to collect and preserve such beneficial microbes, particularly from countries least affected by modernization. Who knows the magic that surviving ancestral biotics might hold for understanding and curbing today’s diseases?

In the magazine Science, Professor Dominguez-Bello, Rob Knight of the University of California, San Diego, Jack A. Gilbert of the University of Chicago and Martin J. Blaser of New York University Langone Medical Center argue for the urgency of preserving stool samples and matter swabbed from the skin, mouth, vagina and nose, especially from remote traditional peoples, before modernity kills off these microbes.

The key to understanding the proposal is that not all germs are bad. Some bacteria and viruses aid digestion; others regulate immune systems. But modern medical, dietetic and hygiene practices have put many on the endangered list. The scientists argue that the diversity of the human populations in which they occur creates diversity in how they function. There are even germs that display “amphibiosis”: They can be good or bad depending on which other microbes are present, or on their human hosts’ genes, age or environment.

Put simply, while we were nearly eradicating TB, the arsenal of wonder drugs — along with practices like elective cesarean sections, processing foods and purifying water — were carpet-bombing many good microbes, alongside toxic germs, that come with birth. We get them when we squeeze through the birth canal and when we drink breast milk — a co-evolution of mothers and microbes unbroken for at least 200,000 years.

Researchers like Jeff Leach, who has studied Hadza hunter-gatherers in Tanzania, and Cecil Lewis and Alexandra Obregon-Tito, who have worked with the Matses people in Peru, have documented that beneficial germs have been disappearing less often in less developed societies.

Americans may have lost half their microbial diversity in recent decades. In China and India, the loss grows ever faster as those countries’ development accelerates.

Research also points to a strong link between this loss, especially in early life, and the epidemic-level increase of many terrible diseases and disorders. In Canada, Meghan Azad has shown that babies receiving antibiotics are likelier to become overweight children and teenagers; research by Brett Finlay and Marie-Claire Arrieta shows that if babies 3 months old lack normal levels of four key bacteria, they are predisposed to asthma. And evidence grows that diminished microbial diversity may trigger or worsen inflammatory bowel diseases, diabetes, food allergies and autism.

An example of a vault’s potential benefit comes from Dr. Blaser, one of the writers in Science: “For most infectious diseases, there isn’t 100 percent mortality. Our ancestors survived many plagues with the help of their microbes. While antibiotics can cure us from some diseases, resistance to these powerful drugs is growing. New treatments for antibiotic-resistant infections, like multi-drug-resistant TB, could come from our ancient microbes.”

New treatments could mean newly discovered antibiotics or uses for bacteria-eating bacteriophages. Stool samples would contain viruses also from a person’s digestive tract, which could, in theory, point toward a cure for drug-resistant TB and other maladies.

Creating the vault could also increase technology transfers to the developing world. Professor Dominguez-Bello argues passionately that making it a public resource could catalyze the creation of local microbe collections around the world.

Many questions remain unanswered: Would a vault offer long-term preservation only? A working collection for countries and researchers? What would be the criteria for a withdrawal — a W.H.O. declaration of a medical emergency?

But the thinking behind the project is sound. We should muster resources to halt the loss of good germs, and restore their diversity and population. You can’t restore microbes that have gone extinct.

The key to success is to keep in balance Mann’s “feverish process,” which is life itself.

Sarah Schenck is a co-director and co-producer of a documentary being made about the critical role of microbes in human health.