There were fewer than 200 maritime pirate attacks in 2016, the lowest level in more than 20 years. Total global incidents declined nearly 22 percent from 2015 — and nearly 60 percent from 2010, when Somali piracy captured the world’s attention.

But violent pirate attacks increased in two places: the Celebes and Sulu Seas between the Philippines and East Malaysia, and the Gulf of Guinea off the Nigerian coast. In both places the number of pirate attacks more than doubled last year and were closely linked to rebel movement.

Some piracy hot spots — Indonesia, Malaysia, Singapore, Bangladesh and Vietnam — all experienced significantly less piracy in 2016 compared to 2015. Even more remarkable has been the virtual elimination of piracy around Somalia, where the Greater Gulf of Aden was for many years the most dangerous area for seafarers (see Figure 1). 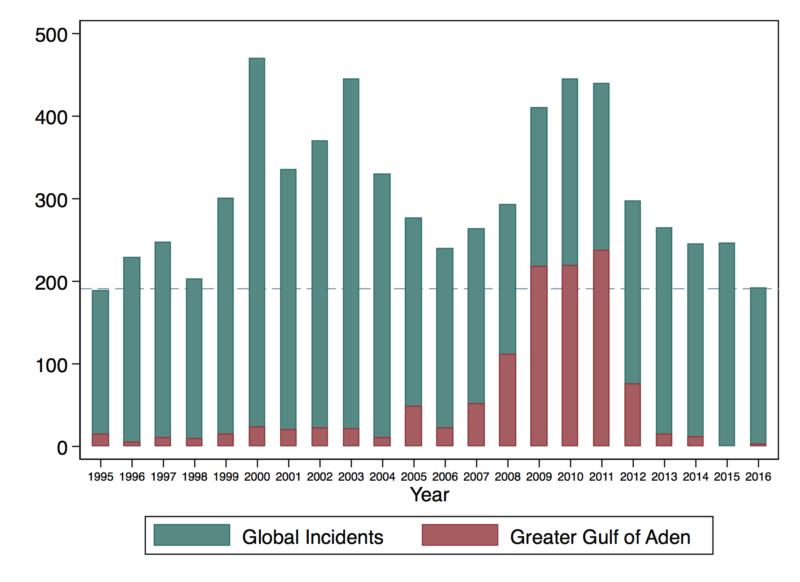 These are the new piracy hot spots:

1. Southern Philippines — Abu Sayyaf, an Islamic militant group, regularly targets fishing trawlers and slow-moving tugboats. More recently, higher-profile merchant ships have been the focus of attacks, as kidnapping for ransom has proved lucrative and revenue from payments help fund Abu Sayyaf’s efforts directed against the Indonesian government. The militant group, while small, aims to establish an Islamic state in the southern Philippines.

In October, Abu Sayyaf militants hijacked the 400-foot Dongbang Giant 2 as it crossed the Celebes Sea, kidnapping three sailors. Less than a month later, the same group seized the Royal 16, a Vietnamese bulk carrier, and fled with six of the crew.

This group also kidnaps tourists from resorts on land. In August 2016, a ransom of $1 million was paid to the Abu Sayyaf for the release of Norwegian hostage Kjartan Sekkingstad, while $413,000 more won the release of Filipino Marites Flor.

Despite the Philippine government’s efforts to crush Abu Sayyaf, the Jakarta Post reported the group took in more than $7 million in ransom money to free 20 hostages seized during the first half of 2016.

The militant group used these funds to purchase weapons, ammunition and other supplies to counter a renewed Philippine military offensive — and implement an extensive series of bombings, including one detonated in the home town of Philippine President Rodrigo Duterte.

The Philippine and Indonesian governments announced plans in June to coordinate naval patrols in the Southern Sulu archipelago to curb the maritime threat and cut off Abu Sayyaf‘s coffers.

2. West Africa — Niger Delta militants, frustrated by inequitable resource distribution and environmental degradation from oil extraction, bomb oil pipelines in the Delta and target tankers and supply vessels servicing oil fields and platforms in the Gulf of Guinea. In February 2016, pirates hijacked the oil tanker Leon Dias, severely injuring one crew member. Nigerian pirates, many of whom are associated with the militant group MEND (Movement for the Emancipation of the Niger Delta), boarded 17 other ships and fired upon nine more during 2016, a significant increase in maritime violence in the area.

Here’s how piracy pays off. These rebels appear to target oil tankers filled with refined petroleum, then siphon the fuel for resale on the black market. Since 2010, these attacks have netted the group an estimated $100 million, which helped procure materiel, pay fighters and support local communities.

Oil revenue accounts for as much as 75 percent of Nigeria’s revenue. Counter-piracy operations are also exceedingly costly and attacks against pipelines, production facilities and transports by similar militant groups in the past cut Nigerian oil production by two-thirds. Renewed violence targeting Nigeria’s energy infrastructure also threatens government revenue by reducing maritime traffic in the region.

Insurgencies last longer than they would without this source of funds

The link between pirates and rebels is reason for concern — our research shows how piracy and civil war occur in many of the same places. Although similar conditions drive both processes, our research suggests piracy can intensify land conflicts by providing rebels with valuable resources.

The elimination of resources to loot that are accessible to rebels, then, may help reduce violence and shorten conflicts. Without these resources, rebel leaders are more likely to return to the bargaining table to formulate a settlement that averts further large-scale hostilities.

In the Philippines, the Duterte regime appears to see counter-piracy operations as a tool for weakening the Abu Sayyaf. Cutting off this revenue source, together with renewed government offensives on land, may help produce a diplomatic opening to end the long-running civil war.

History shows a vicious cycle between land conflicts and piracy

Political violence in the Philippines and Nigeria today helps create an environment where illicit trade in stolen cargo and kidnapping for ransom yield sizable rewards with a low risk of capture.

Our research suggests that 21st century counter-piracy operations and conflict resolution efforts on land will be more effective if employed concurrently. Eradicating piracy remains difficult when the conflict continues on land, while resolving civil war is especially challenging when the availability of resources on the high seas motivate perpetual fighting.