The American electoral circus has taken the stage and people around the world are watching in disbelief. To say they are not impressed would be an understatement. A Colombian columnist called Donald Trump a "lab rat," for testing the U.S. tolerance of toxic political debate. In India, a commentator writes dismissively that the "self-declared 'greatest' democracy is descending into a farce."

Sadly, the reality is that the early stages of the 2016 presidential race are providing the world -- and America -- with a lesson in the weaknesses of the system.

Trump, who currently leads polls for the Republican nomination, has built his campaign on attention-grabbing insults and a level of self-adulation so distasteful that it works better as parody than promotion. It's no wonder comedians (and Democrats) are having the time of their lives watching his show. 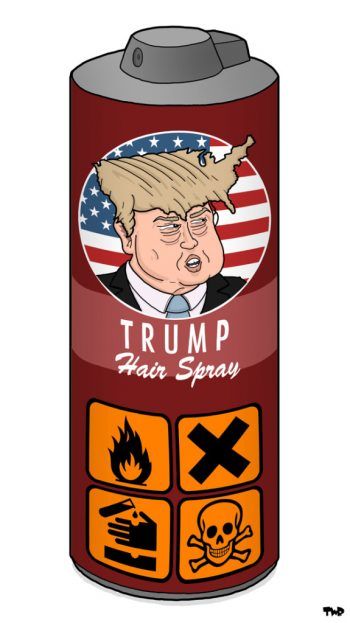 His quick rise demonstrates how a politician can manipulate the electorate, particularly when the field is so large and divided, how name recognition and shock value can so easily tip the scales, and how appealing to fear and prejudice under the guise of "plain talk" can fire up certain segments of the electorate.

In fact this carnivalesque approach is proving so successful that another candidate, Sen. Lindsay Graham, decided to give it a try. After Trump called him an idiot and gave out his cell phone number, Graham put on a show of his own, complete with a samurai sword slashing through his flaming phone.

What's the world to make of American democracy in light of all this?

Sure, some of it is funny. And it is electoral politics, so people expect a lot of empty talk. But Trump is not just a windbag. Yes, he can be that. But much of what he says is also really toxic. It smothers kindness and compassion, without adding any thoughtful, constructive policy solutions. Some might argue that at least it sparks debate. Perhaps, but it also inflames the worst emotions in people.

A Dutch cartoonist captured theTrump formula in one drawing, a mock advertisement for "Trump Hair Spray" featuring warning symbols indicating the contents are poisonous and explosive. But in Latin America there is nothing even remotely humorous about Trump's campaign-launch speech, with its stunningly insulting description of Mexican immigrants -- "They're bringing drugs. They're bringing crime. They're rapists."

Adding almost as an afterthought that "some, I assume, are good people," was never going to be enough to negate the damage. So it was no surprise that his words caused a firestorm and prompted a number of canceled business deals.

But mostly, the remarks left people stunned and shaking their heads.

The Colombian columnist Vladimir Florez said that analyzing "the logic of U.S. politics leaves you with a lot of questions and few answers." The troubling thing isn't that a xenophobe like Trump emerges from time to time, Florez wrote. What is worrying, he suggested, was that in a nation built by immigrants, so many have been applauding him.

In France's Le Monde, meanwhile, U.S. media got part of the blame. There's more than a year left until the election and news organizations are desperate for material, it explained. "Who better" than "'The Donald,' specialist in the politically incorrect" to help feed the news machine?

Another French publication gathered experts on the United States to decipher the mystery of how a "provocateur" and "caricature" can be doing so well. Americans admire "Les self-made man" explained Sylvain Cypel. But he said Trump's appeal is limited to a fraction of America, the most conservative elements of the Republican Party, a part of the population made up mostly of white males.

Everywhere, inside the United States and out, analysts have said that Trump is an outlier, someone who practically no one expects will actually become the Republican nominee, much less the next president. But the Dutch daily de Volkskrant correctly notes that Trump is still unlikely to disappear quickly because of one of the peculiarities of American politics, "He has a fat wallet, so Trump can last for a long time."

So, significant name recognition, a fortune to spend, xenophobic opinions and a national platform for the first Republican candidate debate on August 6. What could possibly go wrong? Many of us have made it a practice over the years to ignore Trump's one-man marketing machine. But his rise to the top of the 2016 Republican polls changes it all. And even if he doesn't ultimately secure the Republican nomination, Trump is threatening to run as an independent candidate if the party doesn't treat him fairly, meaning that he has yet another opportunity to shape the final outcome of the election.

It should, of course, offer some consolation to outsiders that most Americans are also sickened by this ongoing spectacle. But as with the proverbial car wreck, people just keep watching. Could that be the reason for his soaring poll numbers -- that his supporters are amused onlookers telling pollsters they support Trump just to keep the show rolling a little longer?

Those who believe that the candidacies of narcissistic billionaires are destined for failure would do well to remember what happened in Italy. Italians endured years of self-serving former Prime Minister Silvio Berlusconi, underscoring that it isn't just in the United States that ambitious people with plenty of cash will from time to time want to see how far they can get, and what their money can buy.

Ultimately, then, the challenge in any democracy is to ensure that it remains immune on polling day to the dangerous machinations of demagogues, and resistant to their showmanship and inflammatory sales techniques. The world will be watching to see if American voters will -- and whether the system will come out on top of the ego quest of a master manipulator.

Frida Ghitis is a world affairs columnist for the Miami Herald and World Politics Review and a former CNN producer and correspondent. The opinions expressed in this commentary are hers.