Tickling a juvenile chimpanzee is a lot like tickling a child. The ape has the same sensitive spots: under the armpits, on the side, in the belly. He opens his mouth wide, lips relaxed, panting audibly in the same “huh-huh-huh” rhythm of inhalation and exhalation as human laughter. The similarity makes it hard not to giggle yourself.

The ape also shows the same ambivalence as a child. He pushes your tickling fingers away and tries to escape, but as soon as you stop he comes back for more, putting his belly right in front of you. At this point, you need only to point to a tickling spot, not even touching it, and he will throw another fit of laughter.

Laughter? Now wait a minute! A real scientist should avoid any and all anthropomorphism, which is why hard-nosed colleagues often ask us to change our terminology. Why not call the ape’s reaction something neutral, like, say, vocalized panting? That way we avoid confusion between the human and the animal. 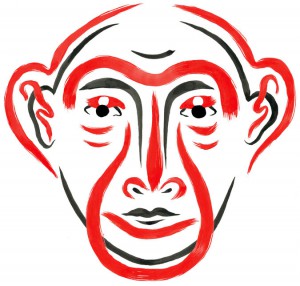 The term anthropomorphism, which means “human form,” comes from the Greek philosopher Xenophanes, who protested in the fifth century B.C. against Homer’s poetry because it described the gods as though they looked human. Xenophanes mocked this assumption, reportedly saying that if horses had hands they would “draw their gods like horses.” Nowadays the term has a broader meaning. It is typically used to censure the attribution of humanlike traits and experiences to other species. Animals don’t have “sex,” but engage in breeding behavior. They don’t have “friends,” but favorite affiliation partners.

Given how partial our species is to intellectual distinctions, we apply such linguistic castrations even more vigorously in the cognitive domain. By explaining the smartness of animals either as a product of instinct or simple learning, we have kept human cognition on its pedestal under the guise of being scientific. Everything boiled down to genes and reinforcement. To think otherwise opened you up to ridicule, which is what happened to Wolfgang Köhler, the German psychologist who, a century ago, was the first to demonstrate flashes of insight in chimpanzees.

Köhler would put a banana outside the enclosure of his star performer, Sultan, while giving him sticks that were too short to reach the fruit through the bars. Or he would hang a banana high up and spread boxes around, none of which were tall enough to reach the fruit. At first, Sultan would jump or throw things at the banana or drag a human by the hand toward it, hoping to use him as a footstool. If this failed, he would sit around without doing anything, pondering the situation, until he might hit on a solution. He’d jump up suddenly to put one bamboo stick inside another, making a longer stick. He’d also stack boxes to build a tower tall enough to attain his reward. Köhler described this moment as the “aha! experience,” not unlike Archimedes running through the streets shouting “Eureka!”

According to Köhler, Sultan showed insight by combining what he knew about boxes and sticks to produce a brand-new action sequence to take care of his problem. It all took place in his head, without prior rewards for his eventual solution. That animals may show mental processes closer to thinking than learning was so unsettling, though, that still today Köhler’s name is hissed rather than spoken in some circles. Naturally, one of his critics argued that the attribution of reasoning to animals was an “overswing of the theoretical pendulum” back “toward anthropomorphism.”

We still hear this argument, not so much for tendencies that we consider animalistic (everyone is free to speak of aggression, violence and territoriality in animals) but rather for traits that we like in ourselves. Accusations of anthropomorphism are about as big a spoiler in cognitive science as suggestions of doping are of athletic success. The indiscriminate nature of these accusations has been detrimental to cognitive science, as it has kept us from developing a truly evolutionary view. In our haste to argue that animals are not people, we have forgotten that people are animals, too.

This doesn’t mean that anything goes. Humans are incredibly eager to project feelings and experiences onto animals, often doing so uncritically. We go to beach hotels to swim with dolphins, convinced that the animals must love it as much as we do. We think that our dog feels guilt or that our cat is embarrassed when she misses a jump. Lately, people have fallen for the suggestion that Koko, the signing gorilla in California, is worried about climate change, or that chimpanzees have religion. As soon as I hear such claims, I contract my corrugator muscles (causing a frown) and ask for the evidence. Yes, dolphins have smiley faces, but since this is an immutable part of their visage, it fails to tell us anything about how they feel. Yes, dogs hide under the table when they have done something wrong, yet the most likely explanation is that they fear trouble.

Gratuitous anthropomorphism is distinctly unhelpful. However, when experienced field workers who follow apes around in the tropical forest tell me about the concern chimpanzees show for an injured companion, bringing her food or slowing down their walking pace, or report how adult male orangutans in the treetops vocally announce which way they expect to travel the next morning, I am not averse to speculations about empathy or planning. Given everything we know from controlled experiments in captivity, such as the ones I conduct myself, these speculations are not far-fetched.

To understand the resistance to cognitive explanations, I need to mention a third ancient Greek: Aristotle. The great philosopher put all living creatures on a vertical Scala Naturae, which runs from humans (closest to the gods) down toward other mammals, with birds, fish, insects and mollusks near the bottom. Comparisons up and down this vast ladder have been a popular scientific pastime, but all we have learned from them is how to measure other species by our standards. Keeping Aristotle’s scale intact, with humans on top, has been the unfailing goal.

Frans de Waal, a primatologist and professor of psychology at Emory University, is the author, most recently, of Are We Smart Enough to Know How Smart Animals Are? from which this essay is adapted.