To opponents of the death penalty, recent accounts of botched executions and DNA-based exonerations of death-row prisoners have revived hope that judges and voters will finally see capital punishment for what it is: an intolerable affront to human dignity.

But while such optimism is understandable, it is misplaced. Support for capital punishment is, in fact, in decline — but it’s less the result of a moral awakening on the part of the public than a symptom of a 40-year-plus process of disillusionment.

In 1972, the Supreme Court declared the death penalty unconstitutionally unfair, but left the door open for states to come up with new laws to remedy the arbitrary sentencing criteria it found troubling. Conservatives seized that opportunity to advance a broader agenda of reclaiming a government that, in their minds, had been captured by liberal elites — welfare-oriented bureaucracies and Earl Warren’s Supreme Court — that were intent on using big government to upend traditional values. The timing was right. Violent crime had been rising since the mid-1960s. More and more Americans wanted a government that would vanquish evil rather than manage it. The revival of capital punishment expressed a powerful moral clarity that “time off for good behavior” did not. 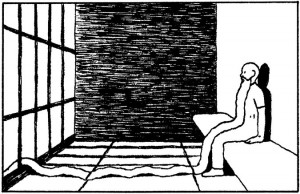 When it came to delivering punishment in a timely and dramatic fashion, moreover, the death penalty delivered the goods: As late as 1959, most of those executed spent less than two years on death row. Thus, as states created new death penalty laws, which the Supreme Court approved in 1976, few foresaw the degree to which federal oversight of capital cases would continue.

This, more than wrongful convictions and botched executions, is what is distinctive about the contemporary American death penalty. New layers of appeals and new issues to litigate at both the state and federal levels meant that inmates put to death in 2012 had waited an average of almost 16 years for their execution date. The deeply unsatisfying, decades-long limbo that follows a death sentence today is without precedent. The 3,054 men and women languishing on the nation’s death rows have become the unwitting cast of a never-ending production of “Waiting for Godot.”

A sense of moral solidarity is hard to generate when the devil appears in the execution chamber 20 years later, a middle-aged or elderly man whose crimes have long faded from popular memory. And it’s impossible to generate when he doesn’t appear in the execution chamber at all: A vast majority of those sentenced to death since 1977 were not, or have not yet been, executed.

Efforts to remedy the problem by reforming the appellate process have been unsuccessful. In 1996, when the average stay on death row was approaching 11 years, Congress enacted legislation restricting death-row inmates’ access to federal courts, in order to speed up executions. But it didn’t work; since then, the time between sentencing and execution has grown by over 50 percent.

The problem, it turns out, isn’t foot-dragging by defense lawyers or bleeding-heart judges. It’s money. In California, for instance, the low wages paid by the state to qualified lawyers who take on indigent inmates’ appeals have meant that there aren’t enough lawyers willing to do the work. Inmates wait an average of three to five years after sentencing for a government-appointed lawyer to handle their appeal. And that’s just the beginning of a process — sometimes lasting 25 years or more — that a federal judge recently determined was so protracted that it made capital punishment in California unconstitutionally cruel and unusual.

More money for defense lawyers would reduce the high error rates in capital trials and speed up appellate reviews. But it is unlikely to be forthcoming. The costs of capital trials and appeals overwhelm budgets everywhere, but particularly in places, like the South, where the political will to fund them is the weakest. It has simply become unsustainable to be both pro-death penalty and anti-taxation, as so many Americans are.

Delivering this message to voters, rather than a moralistic one, might change their thinking. A 2012 ballot measure to abolish the death penalty in California, the shrewdly named Savings Accountability and Full Enforcement for California campaign, appealed to voters’ wallets more than their hearts and came tantalizingly close to passing. Importantly, though, that near-win occurred after nearly seven years of no executions in the state, suggesting that it wasn’t just about the financial cost of the death penalty. It was about what that money had stopped delivering to taxpayers: the sense of control, closure and confidence that are the raison d’être of the death penalty.

As depressing as it may be to abolitionists driven by a commitment to human rights, Americans, most of whom are white and live above the poverty line, find it hard to sympathize with members of an indigent, mostly minority death-row population who have been convicted of horrible crimes. Preaching to the congregation rather than the choir, then, ought to focus on the failure of capital punishment to live up to the promise of retributive justice it once held.

Casual supporters of the death penalty can be made to recognize that the death penalty has become inextricably mired in the very bureaucracy and legalism it was once supposed to transcend, and that the only solutions to the problem — an elimination of appellate lawyers for death-row inmates or a financial bailout — are unlikely to be legal or feasible.

Resources for fighting the death penalty are scarce, and for too long, abolitionists have spent them appealing to the humanistic ideals they wished most Americans shared, instead of one they actually do: distrust of government. Arguing that the death penalty is an affront to human dignity just doesn’t work. But portraying it as another failed government program just might.

Daniel LaChance is an assistant professor of history at Emory University.