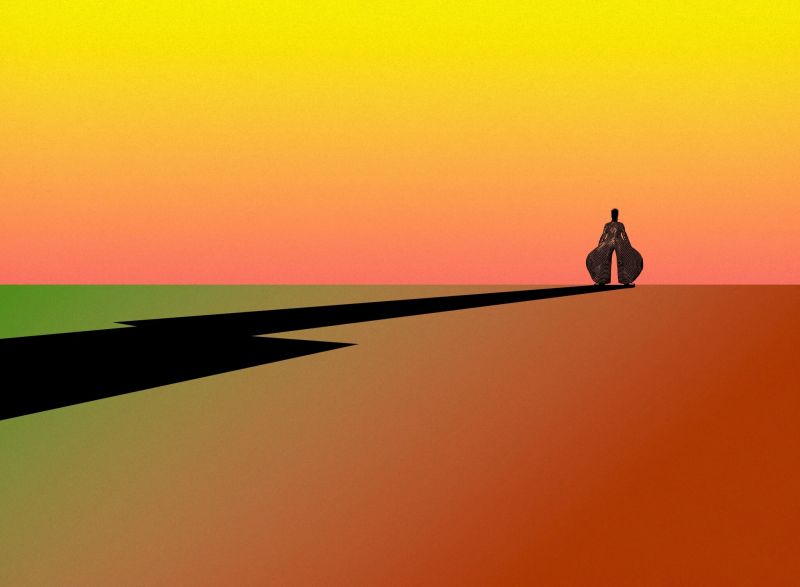 Everything went to pieces after David Bowie died.

It’s been five years since his death was announced. I won’t catalog the catastrophes that have befallen us since that blank, cold January in 2016. You know them all too well. Brexit, it turns out, was just a minor warm-up act from out of town playing its first gig.

It does feel as though things began to fall apart with Bowie’s death. World events slid from bad to worse, and from there it has all been one long downhill slalom that has exceeded the bounds of sense (and even satire) and avalanched into this: hateful violence, political chaos, insurrection and the grinding gruesomeness of the pandemic present. One million poor souls dead.

But before we get into that, let’s cast our minds back five years.

It is unclear what counts as a good death, but at least Bowie left us on his own terms. All that was made public of his death was the barest of facts on Facebook. And rightly. It was a death in absolute privacy with dignity intact, unsullied by tawdry details and gossip.

This is rarely the fate of our cultural heroes. Just think of Prince, who was to the 1980s what Bowie was to the 1970s (cosmic twins channeling the spirit of Little Richard from the 1950s). With most great artists, there is a falling off or a falling apart, a tailing off in the quality of their work, and often their death feels beneath them: a final indignity.

Bowie’s death was something else. It came just after his final album of new material, “Blackstar,” released on Jan. 8, 2016, his 69th birthday. A birth and death separated by 48 hours. Like Christ, in reverse.

I had been listening to “Blackstar” obsessively in the two days after its release and talking about it with friends. But with the news of his death we heard “Blackstar” differently, closer to its true intention: It was a farewell message to his fans. Bowie’s was a death in the form of art, which was exactly what he wanted. “Ain’t that just like me?” he sings at the end of “Lazarus,” a song I still find very painful to listen to.

At its best, music is able to summon a feeling, which can be a joy, but it can also be the expression of an inchoate background fear, sadness or yearning desire, which is deeper than cognition, concepts or consciousness. With Bowie, it is often all these feelings at once. Music can somehow hold that emotion and hold us there for that moment. And we are the music for as long as it lasts.

Looking now at the video for “Lazarus,” with its Button Eyes character, head wrapped in gauze, that Bowie concocted with the artist Johan Renck, it seems clear what Bowie is trying to show us: his true self, dying but addressing us with exhilarating, indeed breathless passion.

My mother, Sheila, died in England a month before Bowie, on Dec. 5, 2015. Five years. I was holding her hand tightly when she died. In the minutes, hours, days and weeks that followed, I felt that time had stopped. Stopped its flow, its movement, its diurnal and nocturnal round. Time was somehow sticking to me and would not budge. I had lost the knack of making time move.

Her death made no sense to me, other than as a brute datum. I could speak of it only in platitudes and banalities. But Bowie’s death some five weeks later somehow enabled me think about my mother through speaking about Bowie. This was fitting, as she had bought “Starman” as a seven-inch single in 1972 and fostered my early fandom. My grief for him and the release of talking with friends and strangers, some strangers who became friends, opened up the possibility of giving some meaning to my mother’s death. Time began to move again. But it still sticks and clings when I think of her and listen to him. I don’t think I am alone in having such experiences.

I recall how perfectly New York City played itself those dolorous dollar days after Bowie’s death. There were vigils and flower shrines near his apartment building on Lafayette Street. There were Ziggy and Aladdin Sane murals and graffiti. People somehow knew what to do without being told to do it.

I mostly remember walking around in the East Village and closer to home, in Brooklyn. It was beautiful. Every bar seemed to have its doors open and Bowie’s music poured into the streets. It seems bizarre to think now of bars full of people, listening to music and having a good time, sad but happy to grieve together.

I had written a little fan book on Bowie in 2014 and some people wanted to talk to me. People of different ages, places, genders, with a common love of Bowie’s music. In fact, I talked to lots of random people in those weeks and months. Frankly, I would talk to anyone. Mine was a mouth made manic after silent grief.

Caring for pop music as I do and thinking of it as the primary way the world has opened up to young and not so young people for so many decades now, I had long worried how music like Bowie’s would survive and whether it would form part of a differentiated and deep canon of culture. I have absolutely no doubt on that score anymore.

Whether you watched Bowie’s breakthrough performance of “Starman” on BBC’s “Top of the Pops” in July 1972 (I saw it on TV with my mum) simply doesn’t matter. Bowie will live on for as long as there are people who feel that they don’t really fit in the world, who feel that they somehow just fell to earth.

These are the people that R.D. Laing in “The Divided Self” (a favorite book of Bowie’s) called the “ontologically insecure,” those people with eccentric minds, for whom autonomy is not a fact, but a question, a search, a cry in the darkness, a sheer struggle to survive. Such people seem to be more numerous than ever. And more desirous than ever for the sad, sweet melancholy of music, which connects us like droplets of water across vast digital deserts.

Five years. Where are we now?

The first track on Bowie’s 1972 album “The Rise and Fall of Ziggy Stardust and the Spiders From Mars” is called “Five Years.” It sets an apocalyptic scene: The news has just come over that Earth is dying and we have five years left to cry in. The narrator responds by pushing toward an experience of sensory overload, hearing and seeing everything at once until his “brain hurt like a warehouse, it had no room to spare.” Everybody, all the fat-skinny people and the tall-short people, have to be somehow crammed inside his head.

And then things begin to get really odd: A girl hits some tiny children, a soldier with a broken arm fixes his stare at the wheels of a Cadillac, a cop kneels and kisses the feet of a priest. Then this:

And it was cold and it rained I felt like an actor
And I thought of Ma and I wanted to get back there.

Somehow, the overwhelming immediacy of the knowledge of the end of the world induces a feeling of unreality and isolation, the impression of the world as a film set and oneself as an actor in a movie. It is as if too much reality leads to depersonalization, the sense of living an illusion.

To Bowiephiles, this scenario is familiar, cropping up in countless songs over the half century that separates “Space Oddity” from “I Can’t Give Everything Away,” the last track on “Blackstar.” But it is perhaps most pronounced in the album “Diamond Dogs” from 1974, which was originally intended to be a musical based on Orwell’s “1984,” another of Bowie’s favorite books. “Diamond Dogs” begins with Bowie reciting “Future Legend,” where a city not at all unlike Manhattan has become Hunger City. All social order has collapsed and crowds of Burroughs-like Wild Boys roam a destroyed landscape, where

Fleas the size of rats sucked on rats the size of cats
And 10,000 peoploids split into small tribes
Coveting the highest of the sterile skyscrapers
Like packs of dogs assaulting the glass fronts of Love-Me Avenue

And then, sliding into the title track, Bowie screams: “This ain’t rock ’n’ roll. This is genocide!” A Stones-like guitar riff locks in and away we go.

But the track on “Diamond Dogs” that best reflects where we are now is “Candidate,” which again presents a destroyed world that has faded into cinematic illusion:

My set is amazing, it even smells like a street.
There’s a bar at the end where I can meet you and your friend.

In such a world of trumpery, in an unreal city, a candidate appears and says, “I’ll make you a deal.” With the fading of the ideal, everything becomes a deal.

Five years after Bowie’s death, the dystopian world that his music describes seems closer than ever. The total sensory overload of the world, the intolerable pressure of reality, induces in us a feeling of unreality, of fakery, of deals and steals. The felt fragility of identity leads us to withdraw from the world into isolation, to a lonely place peopled only by virtual others, avatars and caricatures. Conspiracies compete to fill the vacuum of sense.

The only way we can survive in the face of this world is by retreating from it into our own private lockdowns and peering out suspiciously through windows and screens, feeling lonely and yearning for love. One might think that it is a world in which Bowie would have rather felt at home.

But Bowie would not have felt in any way sanguine or vindicated. Against the dead illusion, decayed reality and vile bodies there is always the countermovement of imagination, pushing back against an unreal reality. There is Bowie’s scintillating, permissive intelligence that speaks to us in our aloneness and reaches out to touch our aliveness. All we have to do is listen and give him our hands. As he says in “Rock ’n’ Roll Suicide”: You’re not alone. You’re wonderful.

Simon Critchley is a professor of philosophy at the New School for Social Research and the author of several books, including the forthcoming Bald: 35 Philosophical Short Cuts, a collection of his writings for The New York Times. He is the moderator of The Stone.