Fifteen towns in France have issued bans on the full-body swimsuit worn by some Muslim women and nicknamed the “burkini,” citing public order and security concerns. According to the ordinance in Cannes, “Beach attire that ostentatiously displays a religious affiliation, while France and places of worship are the target of terrorist acts, is likely to create risks to public order.”

How do pants, a long-sleeve shirt and a head covering made of swimsuit material threaten public safety?

According to France’s prime minister, Manuel Valls, the suit is part of “the enslavement of women.” In a newspaper interview, the mayor of Cannes, David Lisnard, said: “The burkini is the uniform of extremist Islamism, not of the Muslim religion.”

These explanations may seem ludicrous, but Mr. Valls and Mr. Lisnard perfectly summed up the two contradictory public order rationales that European courts all the way up to the European Court of Human Rights use when dealing with Muslim women in religious garb. According to Europe’s highest court of human rights, Muslim women in head scarves and burqas are simultaneously victims, in need of a government savior, and aggressors, spreading extremism merely by appearing Muslim in public. 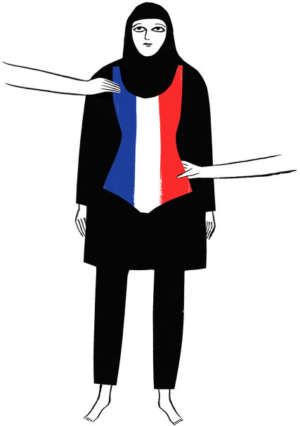 The jurisprudence reflects a perspective deeply ingrained in the French conception of Muslims and Muslim religious garb. To the extent that these French politicians were calculating their legal risk when banning burkinis, they had to know the European Court of Human Rights, which has routinely affirmed lower courts on these issues, would be on their side if they cited public order concerns.

The same rationale has been used to deny a schoolteacher the right to wear her head scarf in the classroom, and to bar a university student from sitting for an exam while wearing a head scarf.

Article 9 of the European Convention on Human Rights is the key provision, and it lays out a broad conception of “the right to freedom of thought, conscience and religion” in the 47 member states of the Council of Europe; this includes the right of a person “in public or private, to manifest his religion or belief, in worship, teaching, practice and observance.” However, a further clause allows for exceptions — limits on the manifestation of belief as “necessary in a democratic society in the interests of public safety, for the protection of public order, health or morals, or for the protection of the rights and freedoms of others.”

Unfortunately, the European Court of Human Rights has shown time and again that a challenged state can satisfy these exceptions largely in the strength of unsubstantiated stereotypes (the notion of a burkini as a type of jihadist “uniform” comes to mind). One reason member states get away with this is the court’s consistent deference to national officials and judges — tipping the balance in favor of the government and against the plaintiff.

This deference has been institutionalized by the makeup of the court, since each member state gets one judge on the bench, and the court always includes the relevant national judge when it hears a case, either as a seven-judge chamber or a 17-strong “grand chamber.” (Recent Muslim religious-clothing cases have gone to the grand chamber.)

States also benefit from the court’s “margin of appreciation” doctrine, which gives wide latitude to member countries on issues of cultural identity, particularly in religious liberty cases. In the case of Muslim religious claims heard at the court, sweeping generalizations and unreasonable fears have often taken the place of rigorous legal reasoning and sound evidence.

The jurisprudence has been consistent over years. In 2001, in Dahlab v. Switzerland, the court held that for young pupils, seeing their teacher in a head scarf could be coercive because “the wearing of a head scarf might have some kind of proselytizing effect.” Since the wearing of a head scarf, the court found, “appears to be imposed on women by a precept which is laid down in the Quran,” that made the custom “hard to square with the principle of gender equality.” The court ruled that a woman in a hijab could not deliver “the message of tolerance, respect for others and, above all, equality and nondiscrimination that all teachers in a democratic society must convey to their pupils.”

In the 2005 case Sahin v. Turkey, the court addressed a religious liberty claim by a woman prohibited by the Turkish government from sitting for a university examination while wearing a head scarf. The court reiterated its reasoning from Dahlab, explaining that upholding the ban helped promote gender equality. It also furthered Turkey’s interest in “fighting extremism.” Here again, the woman in religious garb was simultaneously a victim and a threat.

In 2014, the court decided S.A.S. v. France, a case challenging France’s 2010 law banning face-covering veils, including the niqab and the burqa. Despite the far broader application of this ban, the court’s grand chamber upheld it on even squishier grounds than public safety. It ruled that banning the burqa helped preserve “the conditions of ‘living together.’ ” In other words, a woman wearing the burqa in public infringed the “rights and freedoms of others” who might be offended by it.

The same twisted logic is at play in the French ordinances against the burkini. To an American spectator, such bans probably appear a blatant restriction on religious liberty, or liberty generally, but what is striking is that the European jurisprudence upholding them speaks in the language of human rights. By couching prejudice and fear in the language of Article 9 exceptions, the court in effect uses human rights laws to limit human rights.

Asma T. Uddin is the director of strategy at the Center for Islam and Religious Freedom in Washington and a member of the Panel of Experts on Freedom of Religion or Belief for the Organization for Security and Cooperation in Europe.