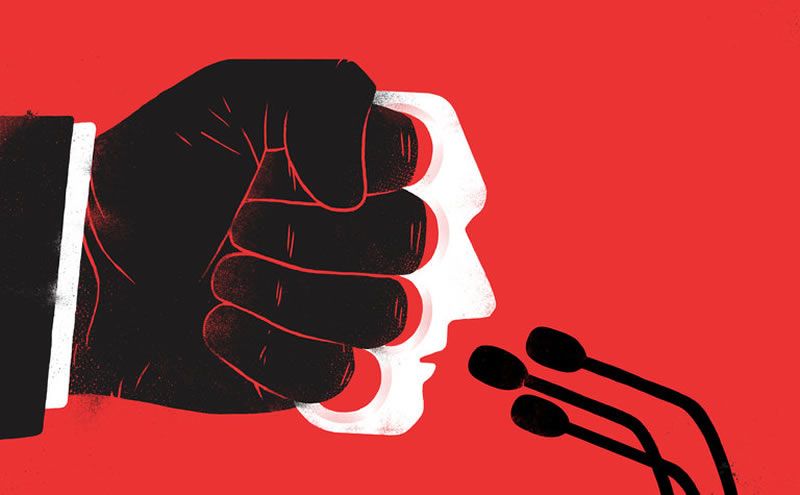 Last month, after I finished a few final items of paperwork, I walked out of the offices of the Human Rights Institute around 11 p.m. and headed home. I was alone and had no sense of any danger. Because of my work, I’ve received plenty of threats before, but I’ve ignored them. I’ve always felt safe in Bratislava.

After I’d gone a few feet, I was attacked. I didn’t see it coming. A punch landed in my face. And then another. Two men I didn’t recognize were standing over me. “You’re a dirty Smer whore!” one shouted, referring to Slovakia’s ruling Social Democratic Party, with which I am not affiliated. Before I knew it, I was on the ground, my face covered in blood. Then they disappeared into the night.

Four hours earlier, I had been at a rally against corruption. Opposition parties organized the rally, and fellow activists and I were there to support the message, but also to remind the protesters that some of the parties that put on the event had done nothing to fight corruption while in Parliament. Moreover, we believed, these opposition parties’ mandate is in Parliament, not the streets.

In the middle of the rally, Igor Matovic took to the stage. Mr. Matovic is the leader of the Ordinary People Party, and the enfant terrible of Slovak politics. As he stood on the stage, he pointed at me and my colleague, Peter Weisenbacher, who is also an L.G.B.T. rights activist, and railed against us: He yelled into the microphone that we were agents of Smer-Social Democracy. He called us despicable provocateurs and accused us of money laundering.

People’s eyes turned angry. The crowd whistled at us, and some people shouted vulgarities in our direction. The police set up a cordon to protect us from violence as the rally ended. Unfortunately, I had no protection several hours later.

Mr. Matovic’s Ordinary People Party, which took 11 percent of the vote in parliamentary elections in March, is not a traditional right-wing party. It lacks a coherent ideology or policy platform and, instead, is a group of independent personalities, many of whom happen to be outspoken bigots, though in the past it has also included a progressive ecologist. The party is overshadowed by Mr. Matovic, who, as one Slovak pundit put it, was thrown into Parliament by voters instead of a rotten tomato, a punishment to the corrupt mainstream politicians.

Many Slovaks hoped that Mr. Matovic, with his combative style, would stand firm against our country’s endemic corruption and the fecklessness of the traditional political parties. People wanted a dramatic change. (A World Economic Forum report recently found that Slovakia is the second-most corrupt country in Europe, after Moldova.) At the same time that the Ordinary People Party was voted in, the Islamophobic, conservative We Are Family party took more than 5 percent of the vote. Even more shocking: People’s Party-Our Slovakia, which has its origins in neo-Nazi groups, won an unprecedented 8 percent.

But if people hoped that these parties would take on Slovakia’s graft problem, they have been sorely disappointed. The opposition has failed to deliver on reform, and instead limited its activities to stunts and political theater, like the anti-corruption rally. These parties have capitalized on the widespread hatred of the social democrats to vilify the government and label anyone who doesn’t agree with them enemies. Ordinary People, along with the other right-wing parties, is introducing a vicious divisiveness to the country and animating an angry base. I was just one victim of this strategy.

There are similar trends in other countries. In the Czech Republic, public discourse is poisoned with anti-refugee, anti-Muslim sentiment, despite the fact that there are virtually no refugees in sight. Over the last year, new, hateful political parties have begun sprouting in that country. And in Hungary, Prime Minister Viktor Orban, the leader of the Fidesz party, has built a fence to keep out refugees and undermined the rule of law to cement his power. Meanwhile, Mr. Orban’s main opposition is Jobbik, an even more right-wing party, which took 20 percent of the vote in the last elections, in 2014. In Poland, the Law and Justice party, elected in October 2015, is pursuing a radical social conservative agenda, while cracking down on the judiciary and the news media.

The political establishment has noticed these trends. Even mainstream parties now are talking like the far right, stirring fear against refugees or blaming the European Union for people’s problems.

It might seem that Central Europe, once home to Nazis and Stalinists, is slipping back into totalitarianism. It’s not that simple. People are not voting for the far right because of their fascism. They vote for these parties because they are looking for an alternative to a mainstream that has failed them. Twenty-seven years after the fall of Communism and 12 years after joining the European Union, the promised Western standards of living are nowhere in sight. The post-Communist economic dream has disappointed many. It took 15 years just for living standards to return to where they were before 1989. Poverty is soaring. In Hungary, 35 percent of the population lives below the poverty line.

To prevent the entrenchment of the far right, Central Europe desperately needs a new progressive force with a vision for how to respond to people’s needs. Progressives should have a plan to fend off economic hardship and insecurity to stop people’s legitimate concerns being transferred into bigotry, xenophobia and hatred. If this alternative does not emerge, the consequences will be disastrous.

Right-wing groups in the region are increasingly taking “justice” into their own hands. For now, this has mostly been aimed at people they think look like Muslims or poor ethnic minorities. Local groups of far-right activists organize small “vigils” around particular Roma settlements or refugee shelters, claiming that they are protecting the rest of society.

In politics, verbal violence against activists or people with different opinions is becoming a favored political tool. I hope my case doesn’t suggest that physical violence will be the new norm. The progressives need to team up soon, because the sound of marching boots is around the corner.

Alena Krempaska is the program director at the Human Rights Institute, a Bratislava-based advocacy organization.