This month, as the luxury cruise ship Crystal Serenity completed its pioneering transit of the Northwest Passage, a Canadian expedition announced the discovery of the Terror, a British ship that vanished along the same general Arctic route some 170 years ago.

For the Crystal Serenity, the biggest luxury liner ever to complete the passage, it was smooth sailing on waters that in the Terror’s day were covered by sea ice so impenetrable that it trapped the ship and another British vessel as they sought a route across the top of North America. All 129 men on what was known as the Lord Franklin expedition died. 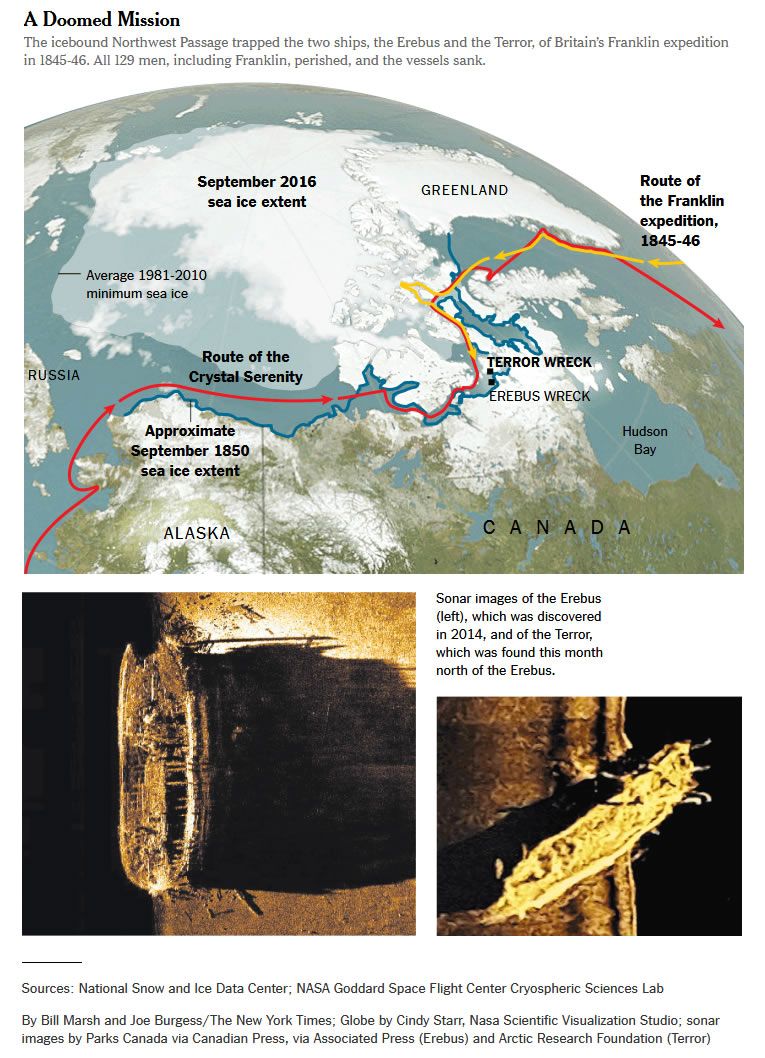 “The trip wasn’t quite what I had expected,” one of Crystal Serenity’s 1,000 passengers told The Bangor Daily News about the 32-day cruise. “Because of global warming this year, the ice has melted so much that actually we had to look for ice rather than try to avoid it.”

The stories of these two voyages capture the profound changes underway as the Arctic feels the heat-trapping effects of accumulating greenhouse gas emissions more than any place on the planet. This is partly because, as the sea ice melts, the ocean absorbs more of the sun’s energy, causing the water to heat up further.

NASA scientists say 2016 is on track to be the warmest year in modern history, with 2015 and 2014 ranking as the second- and third-warmest. For the Arctic Ocean, the current year will tie with 2007 as having the second-smallest ice expanse measured since satellite monitoring began in 1979, according to the National Snow and Ice Data Center. The smallest was in 2012.

For centuries, Western explorers had sought a northern sea route linking the Atlantic and Pacific Oceans. But like the Terror, which was found by the Arctic Research Foundation this month on the bottom of Terror Bay in the Canadian Arctic, and its sister ship, the Erebus, discovered in 2014, none had found a way to penetrate the sea ice until the Norwegian Roald Amundsen succeeded in 1906 after a three-year journey. Even in recent years, variations in summer ice have made passage unpredictable enough to deter tourism.

Now that open water is more routine, a boom in Arctic tourism and commerce is inevitable, leading to excitement in some remote coastal communities eager for income, but concern as well. Michael Byers of the University of British Columbia calls cruises like the Crystal Serenity’s “extinction tourism,” as wealthy people check out a vanishing environment.

But it’s not hard to imagine that those paying $120,095 per person for the “Crystal penthouse suite with veranda” on the Crystal Serenity’s Arctic passage next summer might have to fight a sense that the thrill is gone.

Andrew C. Revkin writes the Dot Earth blog for The New York Times and is the senior fellow for environmental understanding at Pace University.