When I learned last week about the discovery of an early human relative deep in a cave in South Africa, I had many questions. Obviously, they had dug up a fellow primate, but of what kind?

The fabulous find, named Homo naledi, has rightly been celebrated for both the number of fossils and their completeness. It has australopithecine-like hips and an ape-size brain, yet its feet and teeth are typical of the genus Homo.

The mixed features of these prehistoric remains upset the received human origin story, according to which bipedalism ushered in technology, dietary change and high intelligence. Part of the new species’ physique lags behind this scenario, while another part is ahead. It is aptly called a mosaic species.

We like the new better than the old, though, and treat every fossil as if it must fit somewhere on a timeline leading to the crown of creation. Chris Stringer, a prominent British paleoanthropologist who was not involved in the study, told BBC News: “What we are seeing is more and more species of creatures that suggests that nature was experimenting with how to evolve humans, thus giving rise to several different types of humanlike creatures originating in parallel in different parts of Africa.” 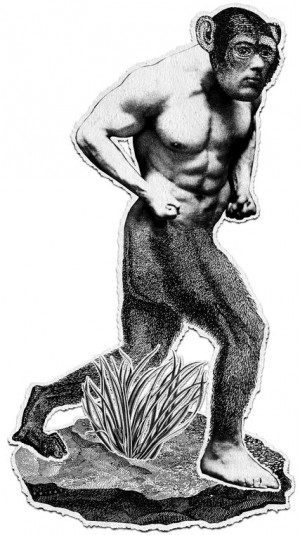 This represents a shockingly teleological view, as if natural selection is seeking certain outcomes, which it is not. It doesn’t do so any more than a river seeks to reach the ocean.

News reports spoke of a “new ancestor,” even a “new human species,” assuming a ladder heading our way, whereas what we are actually facing when we investigate our ancestry is a tangle of branches. There is no good reason to put Homo naledi on the branch that produced us. Nor does this make the discovery any less interesting.

Every species in our lineage tells us something about ourselves, because the hominoids (humans, apes and everything in between) are genetically extremely tight. We have had far less time to diverge than the members of many other animal families, like the equids (horses, zebras, donkeys) or canids (wolves, dogs, jackals). If it hadn’t been for the human ego, taxonomists would long ago have squeezed all hominoids into a single genus.

The standard story is that our ancestors first left the apes behind to become australopithecines, which grew more sophisticated and brainier to become us. But what if these stages were genetically mixed up? Some scientists have claimed early hybridization between human and ape DNA. Did our ancestors, after having split off, keep returning to the apes in the same way that today’s grizzlies and polar bears still interbreed occasionally?

Instead of looking forward to a glorious future, our lineage may have remained addicted to the hairy embrace of its progenitors. Other scientists, however, keep sex out of it and speak of incomplete lineage separation. Either way, our heritages are closely intertwined.

The problem is that we keep assuming that there is a point at which we became human. This is about as unlikely as there being a precise wavelength at which the color spectrum turns from orange into red. The typical proposition of how this happened is that of a mental breakthrough — a miraculous spark — that made us radically different. But if we have learned anything from more than 50 years of research on chimpanzees and other intelligent animals, it is that the wall between human and animal cognition is like a Swiss cheese.

Apart from our language capacity, no uniqueness claim has survived unmodified for more than a decade since it was made. You name it — tool use, tool making, culture, food sharing, theory of mind, planning, empathy, inferential reasoning — it has all been observed in wild primates or, better yet, many of these capacities have been demonstrated in carefully controlled experiments.

We know, for example, that apes plan ahead. They carry tools over long distances to places where they use them, sometimes up to five different sticks and twigs to raid a bee nest or probe for underground ants. In the lab, they fabricate tools in anticipation of future use. Animals think without words, as do we most of the time.

Undeterred by Homo naledi’s relatively small brain, however, the research team sought to stress its humanity by pointing at the bodies in the cave. But if taking this tack implies that only humans mourn their dead, the distinction with apes is being drawn far too sharply.

Apes appear to be deeply affected by the loss of others to the point of going totally silent, seeking comfort from bystanders and going into a funk during which they don’t eat for days. They may not inter their dead, but they do seem to understand death’s irreversibility. After having stared for a long time at a lifeless companion — sometimes grooming or trying to revive him or her — apes move on.

Since they never stay in one place for long, they have no reason to cover or bury a corpse. Were they to live in a cave or settlement, however, they might notice that carrion attracts scavengers, some of which are formidable predators, like hyenas. It would absolutely not exceed the ape’s mental capacity to solve this problem by either covering odorous corpses or moving them out of the way.

The suggestion by some scholars that this requires belief in an afterlife is pure speculation. We simply don’t know if Homo naledi buried corpses with care and concern or unceremoniously dumped them into a faraway cave to get rid of them.

It is an odd coincidence that “naledi” is an anagram of “denial.” We are trying way too hard to deny that we are modified apes. The discovery of these fossils is a major paleontological breakthrough. Why not seize this moment to overcome our anthropocentrism and recognize the fuzziness of the distinctions within our extended family? We are one rich collection of mosaics, not only genetically and anatomically, but also mentally.

Frans de Waal, a primatologist and professor of psychology at Emory University, is the author of the forthcoming book “Are We Smart Enough to Know How Smart Animals Are?”