Carbon dating of an ancient Indian document, the Bakhshali manuscript, has recently placed the first written occurrence of the number zero in the third or fourth century A.D., about 500 years earlier than previously believed. While the news has no practical bearing on the infrastructure of zeros (and ones) underlying our high-tech civilization, it does remind us how indebted we are for this invention. But to whom is this debt owed? And how should it be repaid?

Chauvinistic politicians might loudly trumpet India’s role (as they have, more controversially, in the case of the Pythagorean theorem), but the history of zero remains unsettled enough to still be the subject of continuing quests. The Babylonians used it as a placeholder, an idea later developed independently by the Mayans. The Chinese, at some point in time, indicated it by an empty space in their counting-rod system. Some claim the Greeks flirted with the idea but, finding the concept of the void too frightening in their Aristotelian framework, passed it on to the Indians. The Hindus are generally acknowledged as being the first to formulate it as an independent number — the key to using it in mathematical calculations or binary code. What’s clear is that this history is dominated by non-European civilizations. Truly an alt-right nightmare. 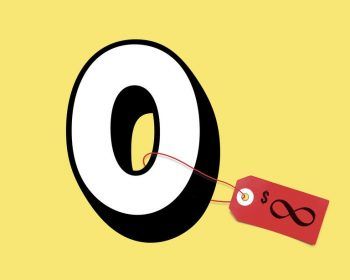 Obviously, there were no intellectual property rights in force back then. Had there been a patent office, it might have ruled, as courts do now, that mathematical advances uncover pre-existing knowledge rather than create anything new — and are hence unpatentable. The conundrum of whether mathematics is discovered or invented is as old as Plato. Certainly, zero displays this duality: The void is as old as time, but it was a human innovation to harness it with a symbol.

In recognition of this innovation, and ignoring all practicalities, suppose someone, somehow, had figured out how to put a price tag on zero. The royalties generated would be staggering — imagine the tab for just your personal use alone! This might lead to a significant redistribution of wealth, most of it going to the developing world.

One difficulty is splitting the payments, since no one could claim exclusive “ownership” of zero’s creation. I asked my “History of Mathematics” class to come up with an exact breakdown based on zero’s provenance, something that, coincidentally, we had just discussed when the carbon dating news broke. Not unexpectedly, India fared best, with 42 percent of the proceeds, though students directed it be split with neighboring countries — after all, the manuscript was found in what is now Pakistan (I can already hear the Indian ministers howl their protests).

Babylon ended up with 18 percent, which if allotted to Iraq, the present-day country of its location, might be just compensation for the years of war endured. Greece came next, with a surprising 15 percent — perhaps my class felt the country was getting shortchanged for all its other mathematical contributions. The Mayans raked in 14 percent, which means Mexico would be rolling in so much money from its share that it might be the one clamoring (and paying) for a wall. My class’s most left-leaning group declared it wouldn’t disburse the money at all, “so as not to encourage capitalism.”

Of course, the exercise was pure fantasy for many reasons; any compensatory scheme would be dead on arrival based on the mention of “reparations.” And yet it highlighted the fact that there were cultures and peoples that parented zero, whose descendants may not be doing as well now. If not financial recompense, is at least some enhanced ethical responsibility toward them owed?

If so, the primary onus might fall on tech companies, arguably the biggest users of this resource. Right now, their prize target is India, with Microsoft, Google and Facebook all vying to bring its enormous population online. These giants might point out that they’re already being altruistic by offering free connectivity, through schemes that will plug in rural areas, vitalize the economy and transform the country — and just happen to add hundreds of millions of potential customers to their rosters for a variety of ads and e-products. Could it be a coincidence that Microsoft, for instance, has also been investing heavily in future cloud services, cybersecurity and e-commerce for India?

Think of it. The companies will use the indigenously developed resource of zeros and ones (the Arabs got their numerals from India, after all), package them into new services and products, and sell them back. India has lived through such irony before. The British Empire took her raw cotton and sold it back as finished garments, destroying the local textile industry and helping lower India’s share of the world gross domestic product to 3 percent from 23 percent.

Fortunately, the parallel flounders. The finished e-products will mostly be manufactured in India, even if backed by foreign investment. Also, the country is wiser: It will not succumb easily to a new cyber-colonialism. Last year, under a broader “net neutrality” decision, the government banned Facebook’s “Free Basics” plan, which offered free Wi-Fi but only to websites of the company’s choosing (Facebook, undeterred, is already marketing a replacement). This year, it also declined a bid from Microsoft to offer connectivity through old television bands. Instead, under pressure from Indian cellular operators, the bands will be auctioned off.

Whether Indian tech companies will prevail remains to be seen. What’s clear is that vigorous market competition is underway to control all those zeros and ones. Despite my liberal student group’s disapproval, zero encourages capitalistic forces, after all.

In fact, zero is essential to much of human endeavor; it has become a fundamental part of our legacy, too seemingly immutable for any kind of compensatory reckoning. And yet the Bakhshali manuscript reminds us that zero wasn’t always at hand. Rather, it was the intellectual product of cultures perhaps far different from our own, of peoples and regions that may have subsided but could once again rise to dominance.

Manil Suri, the author of the novel The City of Devi, is a mathematics professor at the University of Maryland, Baltimore County.