Exactly 40 years ago, I left home. Saigon, the capital of South Vietnam, was about to be taken over by North Vietnamese soldiers and renamed Ho Chi Minh City. It was April 30, 1975. I was 17.

I was staying with my uncles, and they took me with them when they escaped. I felt shameful about being on the losing side of the war, but also relieved: The millions staying behind seemed sure to face a bloodbath at the hands of the Communists. My parents were among them: My mother was stranded in Danang, in central Vietnam, and my father, a civil servant for the southern government, had been captured during the 1968 Tet offensive and was being held prisoner somewhere in North Vietnam. 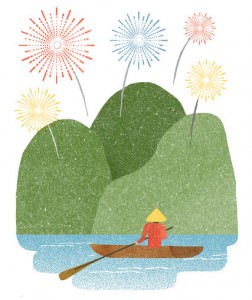 To this day, the Vietnamese government celebrates its victory on April 30, and throughout the country grand official celebrations have been orchestrated for this year’s 40th anniversary. Yet few Vietnamese are paying attention, and for those who are, the regime’s attempt to glorify its past only seems to underline its failures at present.

In America, I used to have to explain that “Vietnam” wasn’t just a war, but a country with a history, a culture and a people. Here the Vietnamese accuse me of being obsessed with the war — the American War, as they call it. It’s true that for me and many Americans, “Nam” is still on in some ways, with stubborn questions about what went wrong then and how the same mistakes are still being made, in Iraq and Afghanistan. But most Vietnamese I know look on the war as an important moment in their history that has been usurped as a propaganda ploy.

Since last week the national theater in Hanoi has been showing a special selection of movies to commemorate the event. Promotional banners are spread across the building’s big white facade. But of the dozens of films presented, only four are Vietnamese: One is a documentary from state television; the other three were commissioned by the Ministry of Culture. The rest are Hollywood productions, mostly thrillers and blockbusters. The film industry in Vietnam, now privatized, makes few movies about the war, and few people want to see them.

Also in preparation for the anniversary, new billboards have gone up around town. One of them was an upbeat, brightly colored poster aping Communist propaganda of decades past, with the obligatory red flag and gold star. In no time commenters on Facebook started ridiculing the designer’s crude Photoshop skills. (The billboard soon came down.)

On blogs and social networks, people are complaining that the government misuses the word “liberation” when it refers to what it did to the South; the socialist policies it implemented there brought poverty to calamitous levels. I see comments about having had enough of “reheating” the blood spilled during the war, and I see repostings of articles from Western media about the failure of reconciliation since then.

People here, especially the young, have other concerns, many of those mundane and consumerist, but not just. On Sunday, as Hanoi police blocked off downtown streets ahead of Thursday’s festivities, they arrested some 20 people who were protesting a municipal order to cut down thousands of old trees. (That decision was rescinded last month, but the demonstrators suspect that some trees are being cut down in the middle of the night, to be sold off secretly.) While the government talks of its triumph in the American War, the people talk of its failures today, like corruption and abuse of power.

When young Vietnamese do look to the past, they don’t admire the sacrifice of the Communists; they admire the stylishness of the Communists’ enemies. Several new websites have republished photos of the 1960s and early 1970s from magazines like Life, showing people in the South looking suave in fashionable dress. Wartime retro is chic today. Many motorcycle riders wear helmets modeled after G.I.s’ combat gear. On the street named after Le Duan, the powerful wartime secretary general of the Communist Party — and architect of the North’s campaign to conquer the South — there is a row of stalls selling American-style military boots and fatigues with “U.S. Army” stencils.

One of Hanoi’s most popular chains of cafes mimics the old Communist days in North Vietnam, with kitschy aesthetics and tongue-in-cheek irreverence. The logo features a prominent star against a red backdrop; the walls and the staff’s uniforms are a drab olive; for a time the menu was written on the pages of books by Lenin. Some 20 new venues have opened in Hanoi and other major cities in the past year alone.

The government has just set up a massive stage at the Reunification Palace in old Saigon, which was made famous by the image of Communist tanks crashing through its gate on April 30, 1975. Ceremonies and a military parade are to take place there on Thursday, and will be broadcast live on television. My friends say they won’t watch. The anniversary is on the eve of Workers’ Day, and they’ll be spending the long holiday weekend away.

Nguyen Qui Duc, a former journalist in the United States, runs an arts space in Hanoi.