On Sunday, voters went to the polls in Sweden. The result confirmed what the polls had forecast: a record high for the national populist Sweden Democrats, a party rooted in white supremacism that wants to reduce the number of immigrants and refugees and hold a referendum on membership in the European Union. As the last votes are being counted, the party has surpassed 17 percent, its highest vote share on record.

This was accompanied by sharp losses for the two big mainstream parties as Sweden’s party system fragments. Since the 1970s, the center-left Social Democrats and the center-right Moderates have regularly won more than 60 percent of the vote. That has dropped to 48 percent as a number of smaller parties, including the radical left, gained support. Nonetheless, the center-left has recorded its lowest vote share in more than a century.

None of this was supposed to happen in Sweden — a stable democracy with a reputation for liberalism. But the ascent of the Sweden Democrats mirrors what is happening in other European nations, including the rise of the Alternative for Germany, Geert Wilders in the Netherlands, and the U.K. Independence Party and then Brexit in the United Kingdom.

So what exactly is happening in Sweden? Here is the story.

In the early 2000s, it seemed as though populism in Sweden had flopped. Sociologist Jens Rydgren attributed this to several factors, including the strong alignment between the working class and the Social Democrats based on economic issues. Meanwhile, identity politics was largely in the background. For example, in 1998 only 3 percent of Swedes felt immigration was a priority. And the Sweden Democrats had not professionalized and distanced itself from a toxic legacy of extremism, which limited its electoral prospects.

But the space for challenger parties such as the Sweden Democrats was opening. Fewer and fewer Swedes reported being adherents to any party, according to the Swedish National Election Studies. This weakened bonds between voters and mainstream parties. 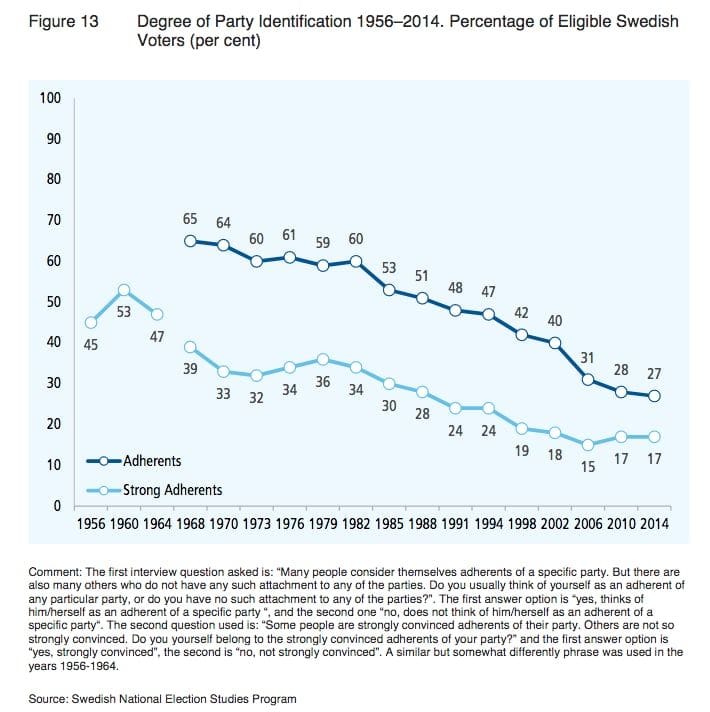 A second factor has been the weakening influence of class. The percentage of the working class voting for left-wing parties has been in decline: 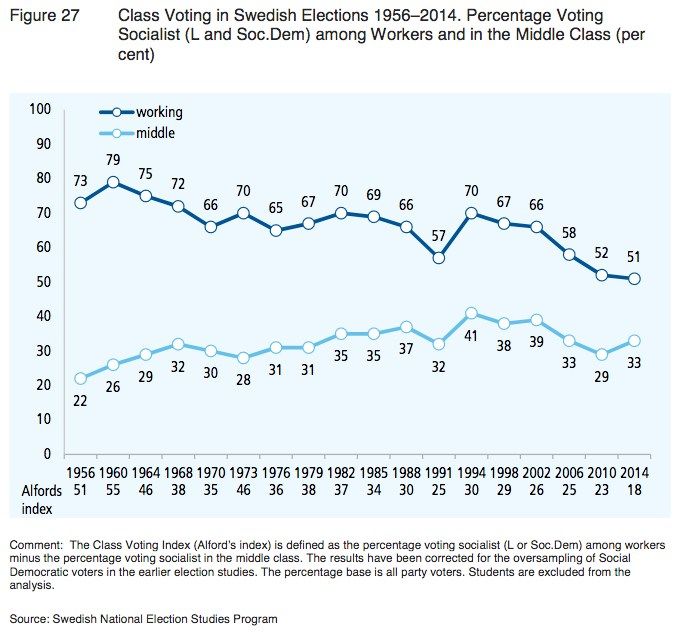 Although these parties have been buoyed by increasing support among the middle class, this still leaves more working-class voters to become a key constituency for populists.

A third factor was the rising salience of issues related to identity and culture more than economics. The graph below shows the massive increase in the percent of Swedes who think that immigration is an important issue or problem: 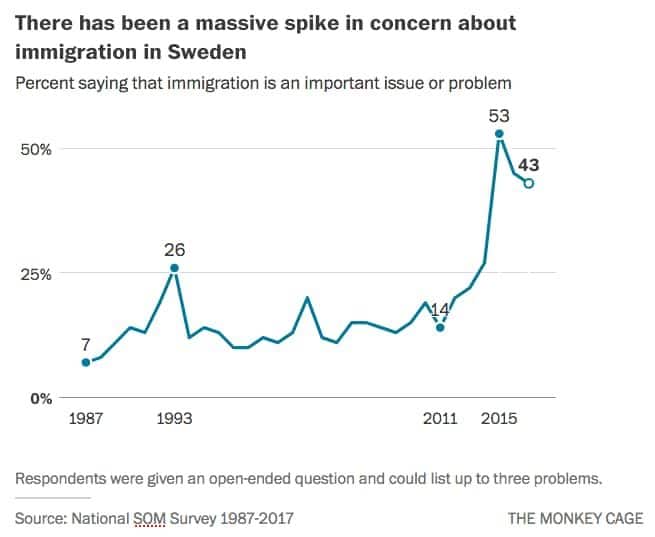 Meanwhile, economic concerns have remained low: In 2017, only 13 percent cited employment or the economy as an important problem. This reflects Sweden’s strong economy — and challenges the argument that national populism arises out of “economic anxiety.”

Immigration in Sweden is connected to rising public concern about crime, social order, terrorism and perceived threats to the national way of life. All of these issues have received coverage in Swedish media.

At the same time, the Sweden Democrats were busily downplaying their extremist roots and seeking to present a more “voter-friendly” image (though accusations of neo-Nazi sympathies persist). Much of the party’s messaging is wrapped in apocalyptic-style claims of national decline and calls to defend Sweden’s traditionally robust welfare model from mass immigration.

When put together, these factors enabled the Sweden Democrats to build support — most of which came from people who tend to be working class, men and have less formal education. These are people particularly concerned about immigration and not simply “protesting” the establishment. These are the characteristics of right-wing populist supporters across Europe.

Even though the Sweden Democrats remain a minority, their impact is already being felt. The Social Democrats have already pledged to reduce welfare for failed asylum seekers, strengthen identity and border checks, clamp down on the freedom of refugees to choose where to live, and permanently ban failed asylum seekers from ever returning to Sweden if they do not leave voluntarily. The mainstream parties have also called for a stronger integration policy. Sweden’s mainstream parties are doing what many established parties in Europe are doing: shifting right on identity issues to fend off the challenge from national populism and appeal to voters concerned about immigration and terrorism.

Thus, while some commentators suggest that national populists have “underperformed,” by polling “only” 18 percent, in many respects they have already won the debate.

Matthew Goodwin is professor of political science at the University of Kent and co-author of the forthcoming “National Populism: The Revolt Against Liberal Democracy.”