Virginie Uwamahoro vanished in April. A primary school teacher, she was last seen settling in for the three-hour bus ride from the Rwandan border town of Gisenyi to Kigali, the capital. She called a friend once she got into town: Someone from the government wanted to see her. She would drop by his office before heading home.

Ms. Uwamahoro’s name is now on a list of missing people included in a new Human Rights Watch report on a series of politically motivated detentions and disappearances in Rwanda since mid-March. Human Rights Watch attributes the disappearances to sweeps by the army and the police targeting people suspected of being critical of the government, and cites 14 cases in one district alone. 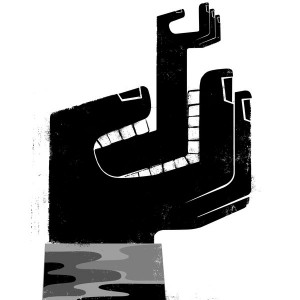 The assistant commissioner of police, Damas Gatare, said in an official statement that the report was “baseless,” but specified that “some people” had in fact been “apprehended” on suspicion of belonging to the Democratic Forces for the Liberation of Rwanda, an armed group composed of fugitives from the 1994 genocide and based in the Democratic Republic of Congo. Traveling to Congo on business or to visit relatives could be enough to cause a person to fall under suspicion, according to anecdotes in the report. The State Department expressed concern and urged a return to “due process of law.” But President Paul Kagame remained defiant, saying at a recent state function: “We will continue to arrest more suspects and if possible shoot in broad daylight those who intend to destabilize our country.”

To observers with years of experience in the country, Mr. Kagame’s stance is no surprise. American censure, on the other hand, comes as a breath of fresh air.

The “genocide guilt card” has been played expertly from Mr. Kagame on down. Nearly $800 million flows into Rwandan government coffers every year from foreign donors still haunted by images of discarded machetes released after the genocide of half a million people 20 years ago. Mr. Kagame continues to be regularly celebrated at American universities and black-tie events in Aspen and Davos, where he is presented as a visionary committed to radical economic modernity.

To be fair, some progress has been made. Rwanda’s gross domestic product has grown since 2001 at an estimated annual rate of 7 percent. Literacy rates have soared, while fertility rates have plummeted. Alone in the Great Lakes region of Africa, the country has a national health care policy that provides coverage for less than $100 per person per year. Once a dusty, garbage-strewn city, Kigali is now a bustling metropolis with soaring glass buildings separated by vast stretches of manicured grass.

But as the report by Human Rights Watch makes clear, something unsettling is happening beneath this shiny surface.

In January, the BBC reported that Mr. Kagame’s former intelligence chief Patrick Karegeya, who had fled to South Africa and was advising intelligence officials there, was found strangled in Johannesburg. The brazen murder led to the expulsion of three Rwandan diplomats from South Africa. Mr. Kagame officially denied involvement, but the BBC reported that he remarked soon afterward at a prayer meeting, “You can’t betray Rwanda and not get punished for it.”

Among foreign aid workers, the level of fear is so high that no one dares to talk about the government in public. “We call it the 24/20 rule,” a health expert said in an interview in Kigali in April. “You say something wrong and you get 24 hours to leave the country with 20 kilos worth of stuff.” The political activist Paul Rusesabagina, who saved the lives of at least 1,200 people during the genocide, providing the inspiration for the film “Hotel Rwanda,” said in a phone interview: “It’s like this government is swallowing people who disagree.”

In the 20 years since the genocide, Mr. Kagame and the governing Rwandan Patriotic Front have built an excellent public relations machinery portraying the ruling Tutsi elite as the “good guys” who put an end to the genocide and the faceless Hutu masses as the “bad guys” who did the bulk of the killing. But research conducted by numerous respected scholars, among them Timothy Longman at Boston University and Brian Endless at the University of Chicago, shows that Rwandans of all ethnicities were caught up in the violence. Human rights groups have found that the R.P.F. killed many Rwandans before, during and after the 1994 genocide.

Many Rwanda scholars share the conviction that the R.P.F.’s disinformation campaign predates the genocide, and that its first public relations coup came on the night of April 6, 1994, when the plane carrying President Juvénal Habyarimana was shot down over Kigali, triggering the massacre.

At the time, suspicion fell on the R.P.F. The former chief of the Rwandan Army under Mr. Kagame, Kayumba Nyamwasa, who is currently in exile in South Africa, said in a telephone interview that Mr. Kagame’s order to shoot down the plane was “an open secret” known to “everyone who was in the army at the time.” In the space of 90 days, however, that assumption was replaced with a conspiracy theory laying the blame with Hutu extremists determined to get the genocide underway.

The result is that the distortion has become the truth. Only the French, who had their own troubled history of interference in Rwanda, have formally accused Mr. Kagame of shooting down Mr. Habyarimana’s plane. Americans, both in government and in the reception lines at events where Mr. Kagame speaks, have been keen to support a government that claims to represent the victims of the genocide, without realizing that no alternative narrative has been allowed to emerge, creating a vacuum in which Rwandan citizens are now demonstrably at risk.

“A few unidentified individuals have been released” since the Human Rights Watch report, said Carina Tertsakian, a researcher for the rights organization. But for any genuine change to occur in a dictatorship as entrenched as Rwanda’s has proved to be, donors will have to apply strong and sustained pressure. The United States alone provides over $200 million in bilateral aid a year. It should make every penny conditional on receiving an accounting of every person who has been detained, apprehended or otherwise disappeared, and insist on confirmation by local and international monitoring groups. Until that happens, Rwandans just don’t know who may be next.

Lara Santoro is a novelist who worked as a journalist in Rwanda from 1996 to 2004. Susan Thomson is a professor of peace and conflict studies at Colgate University and the author of Whispering Truth to Power: Everyday Resistance to Reconciliation in Postgenocide Rwanda.