On a Saturday afternoon in late September, I sat in the brand-new auditorium of my former high school in Beijing, watching the gala for my 10-year reunion. Near the end, teachers stepped onto the stage to deliver speeches.

“Girls, I hope you will focus on finding your life partners,” said the Chinese-language teacher, with the same stern air as when she urged us to succeed on the college entrance exam. “Marriage cannot be delayed,” the biology teacher said. The physical education teacher offered to set up single alumnae with eligible bachelors at her husband’s company.

At the dinner afterward, the conversation at my table turned to career changes. A friend surprised everyone by announcing that she would move to Shenzhen, a southern city, to look for a new job. Marveling at her courage but concerned about her decision, another classmate asked if she was aware of the “complications” faced by a childless woman seeking employment in her late 20s. 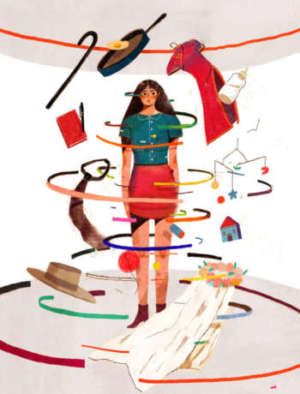 My female classmates and I, beneficiaries of China’s economic boom, are cruising along exciting professional paths. Yet the country’s shifting social conditions carry more complex implications for our lives than first meets the eye. Social changes that have given urban Chinese women new liberties and ambitions often impede our freedom in other ways, erasing policies and ideologies that had helped diminish gender differences.

After China privatized public housing in the 1990s, homeownership became a common aspiration for urban families, and later, a prerequisite for a couple tying the knot. The resurgence of centuries-old beliefs, coupled with soaring real estate prices, have reinforced the social norm that the husband should provide the majority of the money for buying a home upon marriage, and also be the sole holder of the title. A 2012 study found that 70 percent of brides or their families contributed to the purchase of a home, yet a woman’s name appeared on only 30 percent of the deeds.

The arrangement bears enormous economic consequences when couples divorce. The Supreme Court interpreted China’s Marriage Law in 2011 to allow the holder of the title to keep property upon divorce. The divorce rate has more than doubled in the past decade, and with most women’s names left off property titles, Chinese women have been losing a lot of money when marriages dissolve.

Decisions about having children can serve as leverage for women in domestic bargaining. This power is amplified by the government’s recent move to scrap the one-child policy and allow all couples to have two children. And sometimes women resort to extraordinary measures to share in homeownership.

Two years ago, the elderly couple who lived next door with their son and daughter-in-law unexpectedly traded their spacious apartment for two humbler dwellings. I later learned that the young woman had been refusing to conceive until her husband’s parents gave her a home of her own.

But the overall impact of these social changes on women’s work-family choices is distressing.

Housework and child-rearing have always fallen on women’s shoulders, even during the Mao era, when women were held up by the government as men’s equals. Their responsibilities increased in the reform period, beginning in early 1980s, as the state rolled back child care support and the middle class began to invest in early-childhood education. In the meantime, women also began to pursue careers of their choosing, and to compete with men under the new rules of the market economy.

While many mothers, like my own, managed to juggle their domestic duties and professional tasks with remarkable grace, the demands on women without significant spousal support or social policy protection create an impossible balancing act.

“Raising two children in Beijing would definitely cost me my job,” a friend who works in marketing at Google in Beijing confessed to me, explaining why she would not take advantage of the end of the one-child policy.

Also daunting is the widespread pregnancy discrimination in the workplace. “A woman used to have an easy time finding a job after she had given birth once,” said a classmate at my high school reunion. “Now employers have reasons to worry twice.”

While these issues may resonate in the context of Western feminist debates, they are so new to China that the public still has little expectation of positive change. My suggestion to my female friends that fathers should take half of the child rearing and housework responsibilities is often met with a surprised look or a smile of disbelief.

It’s not only children putting caregiving demands on urban Chinese women. Elderly populations in Chinese megacities have soared — for example, in Shanghai nearly 30 percent of the 14 million residents are older than 60, an increase of over 5 percent from a year ago — straining the country’s rudimentary system for caring for the urban elderly. Seeking to shift some of the burden to families, the government passed a law in 2013 requiring adult children to visit their parents regularly.

But the decree merely reflected what was already taking place. Married couples care for their elderly parents in most urban families, studies show, with the bulk of the responsibilities falling on women. Wives are often expected to care for their own parents as well as their husbands’.Is it a wonder, then, that a growing number of professional women in China, buttressed by their education credentials and financial independence, are deciding to delay or forgo marriage and family? A 2010 study shows that half of the women with a university degree or above are unmarried or divorced. Derided as “leftover women” in the news media and by the government, they are subjects of well-intentioned exhortations, like those from my high school teachers, as well as less-than-generous assumptions from society at large.

A few days ago, a female acquaintance who works in a state publishing house told me, matter-of-factly, that she had rejected a well-qualified female job applicant for an editor position because the woman, being single at 36, clearly “has severe personality flaws” or “psychological issues.”

Widespread as it is, gender discrimination has prompted little public debate. Disparaging comments and stereotypical portrayals of women continue to fill cultural productions from children’s books to television dramas. In this year’s Chinese New Year celebrations, a comedy skit on one of the country’s most-watched television programs sponsored by the state compared an unmarried woman to a secondhand cotton jacket, while another showed, without irony, a female official teaching a subordinate how to ingratiate herself to her male boss.

Dissenting voices, though limited in number, are seeking their own channels of expression. Gender-related discussions are flourishing on social media, where terms like “straight-man cancer” are used to mock narrow-minded male chauvinism. Offline, feminist groups such as “lean in” circles have sprung up to foster female bonding and the exchange of career advice, while university theater clubs are producing shows with a feminist bent like “The Vagina Monologues.” More radical moves, however, such as the protest planned by women’s rights activists over sexual harassment on public transportation, have met a ruthless state crackdown.

In 2013, a 23-year-old female college graduate from Beijing filed a lawsuit against a tutoring firm for turning down her job application. The company rejected her, she explained to the news media, because it said that the post of executive assistant required a man, someone who could carry out physical tasks such as refilling the bottle on a water dispenser.

When the case was settled, with the tutoring company paying the woman $4,500, it was hailed as the country’s first gender discrimination lawsuit.

“Finally someone is standing up to protest,” said the woman’s lawyer.

Helen Gao is a social policy analyst at a research company.