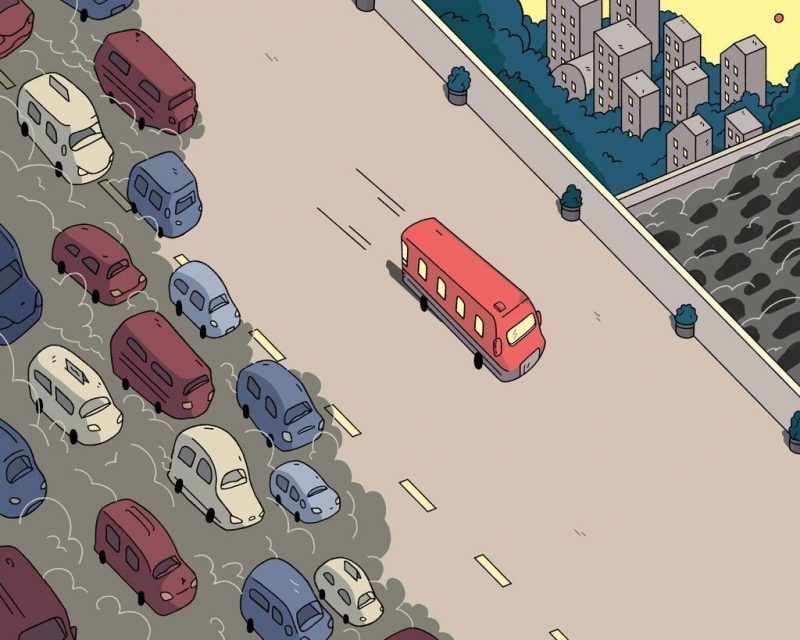 In November, 100 brand-new electric buses rolled off a cargo ship from China at the port of San Antonio on the Chilean coast. Their impressive convoy from the coast to the capital, Santiago, where they will be incorporated into the city’s public fleet, was shared widely on Twitter as evidence of where public transportation is headed in Chile — toward 100 percent electrification by 2050, according to the government’s plans. The new fleet followed a 2016 deal between Italian energy company Enel and Chinese manufacturer BYD to test two pilot buses which proved to considerably cut costs in comparison with diesel vehicles. They have also been a hit with passengers, with low noise levels and cleaner air inside the vehicles.

Santiago’s story is emblematic of a global evolution in the transport sector. In 2017 the global stock of electric vehicles, or E.V.s, surpassed three million, up from one million in 2015, according to the International Energy Agency. Some forecasts predict even more rapid expansion: Bloomberg’s New Energy Finance projects that the global electric car fleet will surge to 530 million by 2040. Much of this growth is driven by a drop in battery costs and an increase in battery range, but specific cities and countries have also led the way using tools such as tax incentives, tighter fuel-economy standards and electric mobility strategies.Though China and Western Europe are leading the charge on E.V.s, cities in Colombia, Brazil, Chile, Mexico, Uruguay and Costa Rica are also stepping up. With over 80 percent of its citizens residing in urban areas, the region has strong incentives to promote electric mobility. Private vehicle ownership is rising at a dizzying pace — the region has the fastest growing car fleet in the world with the number of vehicles set to triple by 2050 — and the transport sector is already the largest source of energy-related emissions. Air pollution from traffic kills tens of thousands of people every year and many of the region’s major cities have unsafe levels of air pollutants. Millions of hours are lost in traffic jams, throttling productivity. The region also has the highest use of buses per person in the world. Electrifying public bus fleets would make them cleaner, more comfortable, and cheaper over the life of the vehicles.

Latin American countries are poised to take advantage of innovations in urban transportation. The region has the cleanest electricity matrix in the world. In 2016, over 50 percent of power was generated by renewable sources, more than twice the average share in the Organization for Economic Cooperation and Development countries. Eighty-four percent of this renewable power was hydroelectric, but some countries are also tapping into gigantic wind and solar potential.

In 2017 regional generation grew by 24 percent for wind power and a staggering 70 percent for solar. In Uruguay, more than a quarter of electricity was generated by wind last year. Even when run on electricity generated partly from fossil fuels, EVs emit significantly less emissions than conventional vehicles because of greater efficiency.

Governments have attempted to counter high price tags with both financial and nonfinancial incentives. In 2017, the Colombian government eliminated import tariffs for up to 1,500 E.V.s per year through 2019. By 2023, the annual quota will increase to 3,000. In July, Colombia’s stock of E.V.s surpassed 1000 units — in 2012, just 33 were sold.

City governments are working with E.V. manufacturers to expand programs that promote electrification of high-use vehicles, especially buses, taxis and corporate and government fleets. Electrifying high-use vehicles maximizes the economic advantage from lower fuel costs as well as the environmental and public health benefits. In Campinas, Brazil, BYD claims that the payback period to recover the costs of its electric buses is just 10 years out of an estimated life span of 20. Electric fleets are also a tool for communicating the effectiveness of E.V.s to the public. Chile now has more electric buses than any nation besides China and the government has highly publicized the electric bus rollout.

Local and national governments should also incorporate electric mobility into long-term energy and transportation planning. Electric mobility strategies can provide clarity to markets and direction for public policy. Building on the region’s first law to incentivize E.V.s in Costa Rica, which entered into force in January, President Carlos Alvarado has announced that by 2021 his administration will launch a plan to establish a fossil fuel-free transportation system.

Finally, partnerships involving city governments and private utilities, automakers, bus companies and local businesses have also accelerated the adoption of E.V.s across Latin America and should serve as models. Last year, Mexico had some 1,500 publicly accessible chargers, most of which were installed by Tesla through deals with shopping centers and hotels. Low-interest loans from multilateral development banks are also enabling cities to make the large upfront payments for electric buses.

E.V.s alone are not a silver bullet. Addressing urban transportation challenges requires a multifaceted approach that should include improvements to public transportation, stricter fuel efficiency and fuel quality standards for all vehicles, and the expansion of nonmotorized transport including walking and biking. But as the only zero-emissions vehicles, E.V.s will play a vital role in meeting the Paris Agreement’s goal of keeping global warming below 2 degrees Celsius.

After decades in which the world’s transportation system has scarcely changed, urban mobility appears on the cusp of rapid transformation. As the world embraces this transition, Latin America is also getting on board.

Lisa Viscidi is director of the Energy, Climate Change and Extractive Industries Program at the Inter-American Dialogue. Guy Edwards is co-director of the Climate and Development Lab at Brown University.