The doctors at the Government Institute of Medical Sciences, also known as the G.I.M.S., a public hospital in Noida, a suburb of Delhi, recently told me that during the first wave of Covid-19 last year, most pregnant women had moderate symptoms and were able to return home after being hospitalized for a few days.

The G.I.M.S. serves about 2,000 patients from the suburb and its surrounding villages every day without charge. Throughout March, April and May, the doctors there told me that most pregnant women arrived with acute respiratory distress syndrome, their lungs collapsing. Out of the 15 pregnant women who were in the gynecology ward of the hospital when I spoke to the doctors, two weeks ago, 11 were on oxygen support, two were on ventilators and one was recovering.

Pregnant women, who have weaker immune systems, have been developing widespread scarring of the lungs after getting infected by the virus. “Their lungs looked white as bone on X-rays”, the doctor said. “Their air sacs filled with fluid that had leaked from blood vessels into the lungs”.

With a more severe second wave of Covid-19 since mid-February, Indian doctors started observing a greater need for high oxygen ventilation for pregnant women, a need for more surgeries to expedite and prematurely deliver babies, and a higher incidence of abortions and stillbirths.

On May 2, Palkan Thakur had an itch in her throat, which developed into a cough. She was seven months pregnant and expecting her fourth child. Local doctors in Faridabad, her hometown bordering Delhi, tried paracetamol, cough syrup and a drip of iron and glucose, but Ms. Thakur was unable to breathe and coughing up blood. 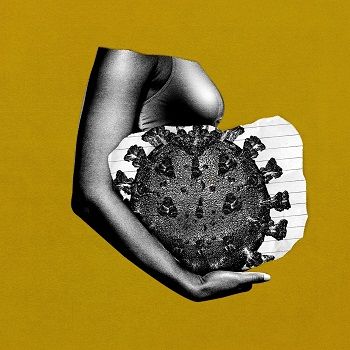 Her husband, Zakir Khan, who ran a store of Ayurveda, the traditional Indian medicine, drove her to Lifeline hospital, three miles from their home. After an X-ray, a doctor informed them Ms. Thakur’s lungs were badly damaged. The hospital had run out of beds. They tried 11 other hospitals and were denied admission everywhere: Some had no beds; some had no oxygen and no ventilators; some sought exorbitant treatment fees.

Thirteen hours had passed since they left their home. Ms. Thakur was bleeding from her nose; Mr. Khan wiped her face and broke down. A relative called with information about a bed being available in the gynecology department at the G.I.M.S. hospital in Noida. They got there at 3 a.m. and Mr. Khan carried his wife in his arms.

A doctor attached a cannula to Ms. Thakur’s nose and administered a continuous flow of oxygen at 50 liters per minute. She struggled to maintain her oxygen saturation rate at 80, way below the normal level of 95. “Is she going to make it?” a junior doctor asked. The older doctor didn’t reply. Ms. Thakur is still fighting for her life. She is 27.

When Ms. Thakur was admitted, the doctors at the G.I.M.S. were also treating a woman in her eighth month of pregnancy. A ventilator helped them push her oxygen saturation rate up to 80 percent. One evening, after a sonography showed a healthy baby, somersaulting inside her belly, the doctors found themselves debating whether they could operate on her for C-section. Administering anesthesia to operate on the mother would lower her oxygen saturation rate to dangerous levels.

The doctors were uncertain she would survive that. “Can we save the child?” a doctor asked. Mother or baby. Baby or mother. They debated. “No doctor should have to make these decisions”, one of the doctors told me. Hours later, mother and baby died.

More than 850 miles from Ms. Thakur’s hospital in the Delhi suburb, about 1,000 healthy babies were delivered in May at Nair hospital in Central Mumbai, the designated hub for treating pregnant women infected with Covid-19 in India’s most populous city. Yet there too, in April alone, 17 pregnant women died, mostly between 25 and 35 years old.

I remembered my own experience of being pregnant with my daughter: the extreme fatigue of the first trimester, an increased heartbeat in the second and how my belly swelled in my third term, making me breathe deeper and deeper.

A report by the Centers for Disease Control and Prevention analyzing about 400,000 women between the ages of 15 and 44 found that pregnant women with Covid-19 are more likely to require I.C.U. beds, invasive ventilation and extracorporeal membrane oxygenation. The risk of death is 70 percent higher in pregnant women than in nonpregnant women. Expecting mothers are also at an increased risk for blood clots.

About 67,000 babies are born every day in India, which suggests that about two million Indian women were in the ninth month of their pregnancy when India started its vaccine rollout in January. On April 29, the Federation of Obstetric and Gynecological Societies of India called for a prioritization of pregnant and lactating women in the vaccination process as the benefits of vaccination seem to far outweigh any theoretical and remote risks.

The United States, Britain and Belgium have prioritized expectant mothers for vaccination. But Indian women are not yet permitted to get the Covid-19 vaccine because Indian authorities have cited lack of empirical data supporting the urgency of inoculating them. On Wednesday, the Indian health ministry recommended Covid-19 vaccination for lactating women, but added that for pregnant women “the matter is under discussion and further deliberation”.

Indian social media has been increasingly filled with desperate calls for help and heartbreaking announcements of deaths of pregnant women due to Covid-related complications. The rising number of these deaths is setting India back after decades of progress at reducing maternal mortality.

In 1946, a year before India’s independence, India reported that for every 100,000 births, about 2,000 mothers died. Ill-equipped and undertrained midwives, home births and poor transportation over long distances during emergencies contributed to the high number. Sustained efforts over the decades, expansion of maternal health services, childbirths in hospitals instead of homes, and improved prenatal and postnatal care helped India bring the maternal mortality rate down to 130 per 100,000 live births in 2016.

Covid-19 threatens to set back these hard-won gains. A study in the International Journal of Gynecology and Obstetrics noted the medical treatment of pregnant women from October 2019 to February 2020 and April to August 2020 fell by 45.1 percent in institutional deliveries; there was a 7.2 percent increase in high‐risk pregnancy and a two-and-a-half-times increase in admission to the intensive care units. Fear of contracting the virus also decreased postnatal visits by women to hospitals.

I spoke to over 50 nursing homes across the country, and every single one refused to admit pregnant women who had tested positive for the virus. Some were afraid of contracting the virus, some didn’t have the resources to handle both Covid-19 positive and negative patients; some felt they were not equipped to adequately treat high-risk patients. Most nursing homes do not have I.C.U. beds or specialist doctors.

During my travels across Maharashtra — one of the most affected Indian states — I stopped at dozens of rural health centers. Most reported a shortage of government-mandated doctors and specialists including surgeons, physicians, gynecologists and pediatricians. Most lacked any form of prenatal care despite the existence of a government program offering free prenatal checkups.

The virus is not sparing expectant mothers even among the upper and middle classes in India’s major cities, who always had the financial resources and better access to health care than people in impoverished villages.

In early April, as the second wave of the pandemic hit Delhi, several members of the Chauhan family in the Saket neighborhood in Delhi were infected. Anshuma Chauhan, their daughter-in-law, who was eight months pregnant, isolated in her bedroom. During the night of April 29, Ms. Chauhan couldn’t breathe. “Eventually the virus found her”, her sister-in-law told me.

With her oxygen saturation levels deteriorating, after a tedious search they found a bed at Sunrise Hospital, about seven miles away. Doctors informed her family that the Covid-19 medication she needed would be harmful for the baby and pushed for an emergency C-section. On the evening of April 30, she delivered a healthy boy.

Covid-19 protocols prevented her family from joining her. Ms. Chauhan was devastated when the doctors rushed the newborn to the I.C.U. for babies. But a few hours later, when her own condition deteriorated, the hospital had no ventilator.

The following morning, after pleas for help and a social media campaign helped along by a Bollywood actress, the hospital found an I.C.U. bed for Ms. Chauhan at another hospital in south Delhi. They rushed her out on a stretcher, but when they reached the other hospital, she was declared dead on arrival.

Alia Allana is an Indian journalist.