On Sept. 18, residents of Scotland will head to voting booths to answer the question, “Should Scotland be an independent country?”

The most recent poll suggests that they will say no — the pro-union Better Together campaign leads by 53 percent to the independence campaign’s 47 percent. But even if the answer is no, why did Scotland feel the need to ask itself this question in the first place? 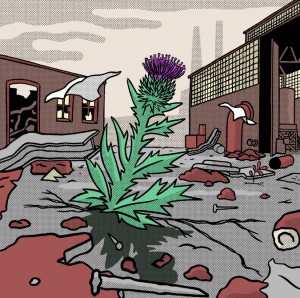 Yet even today, in an era of global markets and global brands like Starbucks, McDonald’s, Twitter and Facebook, nationalism has failed to disappear. Instead, by reworking the old idea that “small is beautiful,” secessionist movements from Scotland and Catalonia to Flanders and Lombardy are campaigning for the rebirth of small independent states whose greater adaptability and cultural homogeneity, they claim, will make them economic success stories and paragons of social justice.

It has taken the Scottish National Party only a half-century to move from irrelevance — securing 0.5 percent of the Scottish vote in 1955 — to center stage as the majority government in the devolved Scottish Parliament.

What changed in the interim was not Scotland’s sense of “Scottishness” — the country’s distinctive identity has been a constant feature of its cultural and civic life throughout the Union With England, which dates from 1707. Scotland never became “North Britain,” but equally, for three centuries, Scottish patriotism did not demand expression in a separate state.

What is new is the impact of global change. Scotland has been transformed from one of the workshops of the world to a service economy. At one point, Scotland’s shipyards produced a fifth of the world’s ships, and its manufacturing and mining sector employed more than 40 percent of Scottish workers. It now employs just 8 percent.

Scotland had to embark on a 50-year search for new skills, new jobs and a new prosperity — its real quarrel should be with globalization, rather than England. But just as, during the Industrial Revolution, nationalist movements sprang up as people tried to protect and shelter their communities against uneven and inequitable patterns of growth, Europeans are once again mobilizing around traditional identities, this time amid the insecurities of globalization.

And so Scots ask what post-imperial Britain can do for them and, in particular, question whether the current Conservative-led Britain — itself planning a referendum on its membership of the European Union before the end of 2017 and making controversial cuts in social security — is capable of uniting Britain around a common project and shared purpose for the global era.

Britain has never been united by ethnicity. We are four nations in one state. And, always pragmatic, we have never shouted from the rooftops about the shared ideas that bind us together in the manner of America (land of liberty and opportunity) or France (liberté, égalité, fraternité).

Instead, Britain has its institutions — from the monarchy and the army to the House of Commons and the BBC — none of which now appear able to generate enough Scottish pride in the union to secure a decisive “no” vote. To many, the United Kingdom today looks as if it is “united” in name only.

But delve deeper, and the United Kingdom does indeed have a basis for partnership in the values that underpin our unique National Health Service and welfare state. It is the idea that by pooling and sharing resources across four nations we guarantee Scots, English, Welsh and Northern Irish rights to health care, education, welfare and minimum standards in the workplace, irrespective of their nationality.

Americans may share equal civil and political rights, and the European Union may share a common market, but Scotland, England, Wales and Northern Ireland have gone much further by sharing the same social and economic rights.

The impact of the United Kingdom’s achievement is striking. The median income of a family in Mississippi is around 60 percent that of a family in New Hampshire. The average income in Bulgaria, the poorest member of the European Union, is about 9 percent of that of Luxembourg, the richest. Yet the income of a typical Scot is now on a par with that of his English neighbor.

So the United Kingdom rose to the 20th-century challenge of spreading the benefits of cooperation across a multinational state while upholding the cultural traditions of each of its nations. Globalization creates a complex 21st-century challenge. How can nations successfully maintain their distinctiveness in an interconnected world where goods and services are no longer sourced locally, but globally, and where capital flows across national borders? There is a fear that if you integrate you may lose your identity, and yet also an ancillary fear that clinging to your identity may cut you off from the world’s opportunities.

Proud of their enduring cultural distinctiveness and yet also well aware of the advantages of cooperation, Scots may offer an answer. They have already insisted that the United Kingdom change from the old unitary state of the classic constitutional textbooks, based on an indivisible Westminster sovereignty centered in England.

With Scotland as the pacemaker for the transfer of power from London to its devolved representative assemblies across the country, the United Kingdom is moving as close to a federal state as is possible in a country where 85 percent of its population comes from only one of its four parts: England. Next it has to prove that the union is the best platform upon which Scots can successfully engage with the wider world.

Gordon Brown, a member of the British Parliament, a former chancellor of the Exchequer and prime minister, and the author of My Scotland, Our Britain.