To hear the national news media tell the story, you would think my city, El Paso, and others along the Texas-Mexico border were being overrun by children — tens of thousands of them, some with their mothers, arriving from Central America in recent months, exploiting an immigration loophole to avoid deportation and putting a fatal strain on border state resources.

There’s no denying the impact of this latest immigration wave or the need for more resources. But there’s no crisis. Local communities like mine have done an amazing job of assisting these migrants.

Rather, the myth of a “crisis” is being used by politicians to justify ever-tighter restrictions on immigration, play to anti-immigrant voters in the fall elections and ignore the reasons so many children are coming here in the first place. 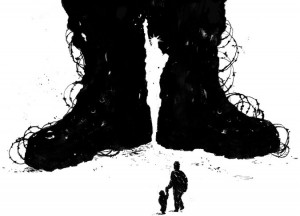 In the last month, about 2,500 refugees have been brought to El Paso after crossing the border elsewhere. The community quickly came together to support the women and children and Annunciation House, the organization coordinating the effort.

Contrary to the heated pronouncements, this is nothing we haven’t seen before. Groups of refugees arrive by plane and are processed by Immigration and Customs Enforcement. When they are released, Annunciation House takes them to a shelter where they get a shower, a place to sleep, meals and even health care — all provided by volunteers and private donations.

The families of the refugees also help, often paying for travel costs and taking them into their homes. The refugees then move on, to Florida, Georgia, New York or elsewhere.

While the numbers of refugees arriving in El Paso are a fraction of the number arriving in McAllen, in southern Texas, the chain of events is generally the same. Like El Paso, South Texas is not the permanent destination for these refugees. And the response from McAllen’s citizens has been generous, too.

The same can’t be said of our politicians. What we are hearing from Austin and Washington is an almost Pavlovian response to immigration concerns. My governor, Rick Perry, a Republican, announced this week that he was sending 1,000 National Guard soldiers, at a cost of $12 million a month, to bolster the border.

And despite President Obama’s efforts to work with Central American leaders to address the root causes of the migration, his recently announced request for $3.7 billion, supposedly to deal with these new migrants, contains yet more border security measures: Almost $40 million would go to drone surveillance, and nearly 30 percent of it is for transportation and detention.

In Texas, state legislators and the Department of Public Safety are planning to spend an additional $30 million over six months to create a “surge” of state law enforcement resources, an expenditure that some in our state’s Capitol would like to see made permanent.

The costs are significant. Every day we detain an undocumented child immigrant, it costs Immigration and Customs Enforcement — i.e., the taxpayer — $259 per person, significantly more than we spend to educate a child in a middle-class school district.

The irony is that this cash-intensive strategy comes from leaders who consistently underfund health care, transportation and education. And they ignore the crucial fact that children crossing our borders aren’t trying to sneak around law enforcement: They are running to law enforcement.

What is most alarming, however, is the attempt to erode rights and protections created by intelligent, humane legislation.

The debate is centered on the Trafficking Victims Protection Reauthorization Act, a law signed by President George W. Bush to provide legal and humanitarian protections to unaccompanied migrant children from countries other than Mexico or Canada. The act passed with bipartisan support, yet the “crisis” is now being cited by some of the same legislators who supported the law as a reason to repeal or change it.

This effort to take away rights that were granted when there was significantly less anti-immigrant fervor isn’t just shortsighted and expensive, it’s un-American. We can debate the wisdom of providing greater protection to Central American children than to Mexican children, but there can be no doubt that giving safe haven to a child facing violence in a country that cannot protect its most vulnerable citizens is what a civilized country, with the resources we possess, should do.

Our border communities understand this. I hope the rest of the country, including our leaders in Austin and Washington, can follow our lead.

Veronica Escobar, a Democrat, is the county judge in El Paso.