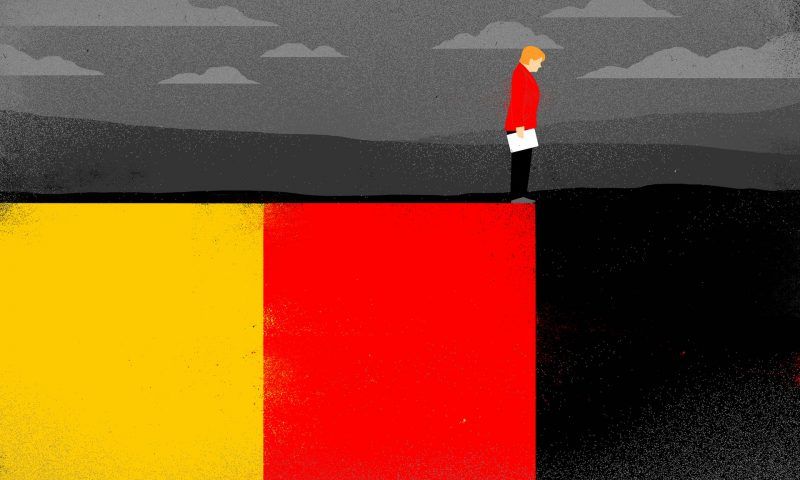 Angela Merkel’s New Year address on German television has acquired all the familiarity of the Queen’s Christmas speech. So much so that one newspaper ran a front page showing the chancellor’s 12 years in shiny-jacket attire under the headline, “Can the Social Democrats put up with another one of these?”

The needling of the centre-left Social Democrats (SPD), for preparing to support Merkel’s fourth term in office, highlights a more irreverent tone towards “Mutti”, as she restarts stalled talks to hammer out a new coalition.

The chancellor has been attacked by some of her own former supporters for her unwillingness to be more open about the practical implications of absorbing the 2015 wave of refugees, and for allegedly failing to identify warmly enough with the victims of the Christmas terror attack in Berlin in 2016. In other words, she is being treated like any other long-stay politician showing signs of fatigue. On a road trip through Germany I heard grumbles and frustration about a chancellor who only a year ago was hailed as virtually superhuman.

It is now just over three months since an election which saw Merkel and her SPD rivals punished at the polls, a sharp rise in support for the far right, and votes scattered liberally across smaller protest parties, from the free-market liberals in the FDP to the Greens and leftwingers Die Linke. The public is wearying of coalition talks that have failed to yield either a “Jamaica” coalition of the Christian Democrats, the FDP and the Greens, or (so far) a grand coalition of the Christian Democrats and SPD.

Merkel’s ability to choose a coalition deal that suits her is less powerful than it was. For the first time, her message to the SPD – “the world won’t wait for us” – was part chiding, part imploring. The party, in turn, is hamstrung by leader Martin Schulz, who took them down to a mere fifth of the vote, and foolishly promised after the election not to re-enter a Merkel-led coalition.

Together with Tilo Jung, a video blogger, I hit the autobahns from Berlin into Mecklenburg in the old East – close to the wastelands where Merkel grew up. As a journalist, I covered Germany’s reunification and believe Merkel helped define the positive tone and stability of Germany after 1990. Tilo, by contrast, is impatient with her technocratic language and fudging of awkward choices. Conversely, he is keenest on Merkel because of her response to refugees. I admire the values that led her to act as she did, but fret that, like many liberals now, she is less good at addressing the difficult questions that arise from immigration (whether through open borders or single-handed refugee largesse).

Many insights that struck me came from encounters with Germans beyond the country’s serene self presentation in Berlin – like the Mecklenburg workers we met who worried about low wage levels, and a young couple commuting huge distances to find higher salaries in the old West. We encountered a successful middle-aged voter for the far-right Alternative für Deutschland who had previously been a Merkel loyalist. How she intends to win back such voters (the AfD has high levels of popularity among the under-44s), while remaining true to the spirit of her commitment to open borders in 2015, is a mystery.

The popularity of the small and insurgent parties is causing headaches on the centre-left, as well as the centre-right. Manuela Schwesig, a Mecklenburg SPD politician, talks in forthright language about the failings of coalition politics. One nascent organisation, SPD Plus Plus, is calling for a fresh start and a bigger voice for the grassroots.

For all the barnacles that now attach to her leadership, Merkel will not shrivel as a political force in 2018. Only she has the votes and personal heft to bring together a government. But the strains of the coalition will be intense, and her leadership will be more fraught than ever. It will rely on her rightwing Bavarian sister party, which will demand a larger say in economic matters, with the SPD less inclined to sign up to another round of Merkelism just for a seat at the cabinet table. Her toughening of tone on migrant checks and removal of failed asylum seekers risks appearing erratic.

It is no longer absurd to suggest Theresa May could outlast Merkel in office. So the task for Germany’s durable leader will be to decide more precisely what her chancellorship should represent at home, as well as on the European stage.

Germany’s politics is no longer the stuff of soporific speeches and a supine parliament – the shift reflects a more fragmented society and a more assertive electorate. Merkel will need to either use her wiles to rise to a new German reality, or begin to make way for the post-Mutti era.

Anne McElvoy is a senior editor at the Economist. Her BBC Radio 4 documentary, Germany Without Merkel, is on iPlayer.