My father, Azzam Jarrar, died last month. He was a proud Palestinian, a refugee, a civil engineer, a farmer and an entrepreneur. He was also my friend and mentor. He taught me the multiplication tables on our way to school in Saudi Arabia. He taught me how to question authority when we lived in Iraq. He helped me finish my master’s degree when I lived in Jordan. Above all, though, he was the gateway to my Palestinian roots and identity.

My dad fled his home with his family in 1967, when Israeli soldiers invaded and occupied the West Bank. He went first to Jordan and then to Iraq, where I was born. I was the first Jarrar to be born east of the Jordan River since our family was established on Palestinian land centuries ago.

I didn’t have the chance to visit my relatives on the West Bank until 2015, when I traveled there for a short work trip while working for a Quaker nongovernmental organization. Being in the diaspora meant that I wasn’t given the opportunity to connect with the land and people. My only connection to my family history was through old stories and a few blurry pictures that my father took with him when he left as a teenager.

That’s why, after my father died in Jordan in October, it was so important for me to visit my extended family in the city of Jenin, to mourn his death with them. Unfortunately, I was prevented from doing so by the Israeli government. 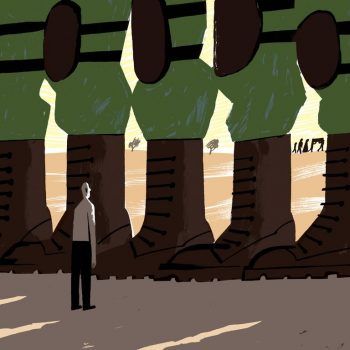 I had visited Israel, the occupied West Bank and Gaza Strip two more times since that first trip in 2015. Like most Palestinian-Americans, I was questioned at the border about my family and personal life for hours before being admitted.

My latest visit was different. This time, Israeli officials were mostly interested in my work, even though I made it clear that my partner, Alli McCracken, and I were traveling in our personal capacity to mourn my father and visit my family.

I’m the Middle East and North Africa advocacy director for the human rights organization Amnesty International U.S.A. In that capacity, I have played a leading role in a new campaign that seemed to get the Israeli border guards’ attention, a campaign calling on governments to ban goods from Israeli settlements.

The officials who questioned me asked why Amnesty has a problem with Israel. I kept trying to steer the conversation back to my dad’s memorial service, but they insisted on discussing the organization’s work. Alli, who also works for Amnesty International, was questioned for a long time, too. They took her phone and went through her text messages.

After hours of back and forth, I was informed that I was being denied entry for reasons of “public order” and — believe it or not — “the prevention of illegal immigration.” I called the American Consulate General in Jerusalem and was told that there was nothing the officials there could do to help.

Based on the questions I was asked, I had no doubt that this denial of entry was retaliation for my work. Amnesty International believes Israel’s settlement enterprise amounts to a war crime. Under international law, governments have an obligation not to recognize or assist “illegal situations.” That’s why Amnesty is calling on governments across the world, including the United States, to uphold that law and not allow Israeli businesses to profit from an illegal occupation.

Israel seems to have denied me entry under legislation passed in March that bans entry to Israel for noncitizens who knowingly issue “a public call for boycotting Israel.” This law pertains not only to the boycott of goods produced in Israel proper but also to goods produced in settlements. Although Amnesty International calls for a government ban on importing those goods — not a consumer boycott — the Israeli government seems to treat it the same way.

Could my teenage dad fleeing his hometown half a century ago have imagined this happening to his son? I wanted to visit his old school and my grandparents’ old house. I wanted to touch the olive trees he climbed as little boy, and eat hareeseh, my favorite Palestinian dessert made of semolina and coconut, from the shop in central Jenin. Does it even exist anymore?

I wasn’t just upset about missing my dad’s memorial service. Before I left the United States, I told my 4-year-old son that I was going on a trip because his grandpa had died. He cried a lot. Then he asked me if we could plant his grandfather back in earth like a plant and wait until he grows back. I told him we couldn’t. He said he would just use his imagination. I tried to use my imagination while I was being sent back from the border crossing — I tried to imagine my family’s land that I couldn’t plant my father back into.

When I returned home, my son asked me about the trip, and I had to tell him that I wasn’t able to go. He looked confused. I couldn’t explain the details — my work, Israel’s settlements and the occupation, its unjust laws that stifle civil society. I know I’ll have to tell him about all that someday.

It won’t be an easy story to tell, not only because of the Israeli government’s actions but also because of the United States government’s lack of action. Although I’ve tried to follow up, my own government has not stepped in to protect my right to equal treatment, and yet continues to help sustain illegal settlements by allowing the flood of Israeli goods into American markets.

Israel must respect my right, and the rights of others, to engage in peaceful human rights work without fear of reprisal. Whether or not the Israeli government agrees with my work — and, of course, I know it doesn’t — I still should have been able to take part in those most human of activities: mourning my father and celebrating his life.

Raed Jarrar, is the advocacy director for the Middle East and North Africa at Amnesty International U.S.A.