On Dec. 2, President-elect Donald Trump startled observers when, departing from protocol, he took a phone call with Taiwanese President Tsai Ing-wen. Trump has suggested that under his administration, the United States may break from the pointedly ambiguous “One China policy.”

And so, during his final news briefing of the year, President Obama reiterated the nation’s long-term commitment to the One China policy. He said that there is consensus on both sides of the Taiwan Strait on maintaining the “status quo,” and that “the Taiwanese have agreed that, as long as they can function with ‘some degree of autonomy,’ they won’t charge forward and declare independence.”

But is he right?

The “status quo” between Taiwan and China is often discussed as if everyone involved agreed and attitudes toward the relationship were static. But that’s not so.

Here’s what we find when we examine Taiwanese attitudes toward China.

1. Taiwan is de facto independent. The Taiwanese see themselves as Taiwanese, not as Chinese.

The official stance of Taiwan was that Taiwan is part of China. But the China that this stance refers to is the Republic of China (based in Taipei) instead of the communist People’s Republic of China (based in Beijing). (One interesting fact is that the special institution National Unification Council, which defined the official stance in 1992, was “ceased” in 2006 along with the Guidelines for National Unification.)

Since the 1970s, PRC became diplomatically acknowledged as China by most nation-states, including the United States. That is, ROC no longer asks to be seen as representing all of mainland China. Its constitution, which claims sovereignty over the whole mainland, does differentiate between the “free area,” or the island of Taiwan, and the “mainland area,” after a series of amendments that have been added since the 1990s.

But the ROC has never been part of the PRC in its history.

The majority of Taiwanese believe that Taiwan is already an independent country called the Republic of China. As the figure below shows, more than 70 percent of Taiwanese agree with this statement. 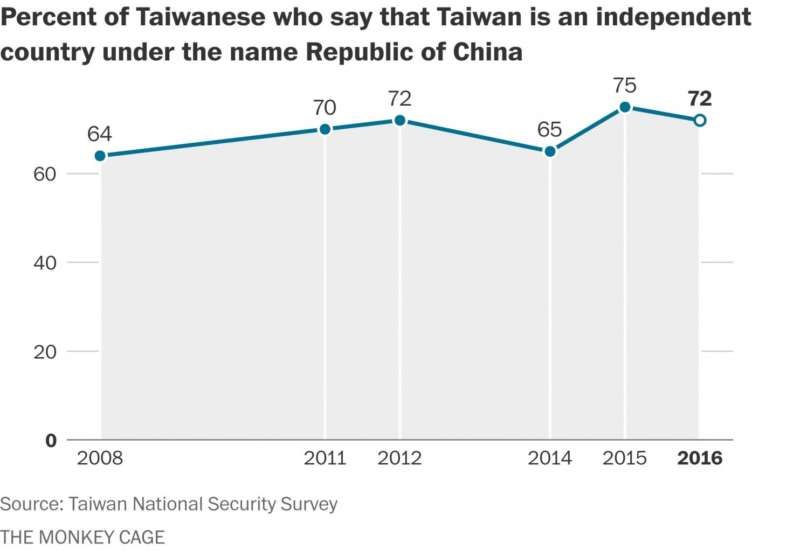 What’s more, ROC residents increasingly identify as Taiwanese rather than Chinese. That identity has changed significantly since the island became a democracy in the 1990s. In 1991, ROC and PRC representatives met with one another for the first time since the 1949 civil war. At that point, about one-fourth of Taiwan’s residents identified themselves exclusively as “Chinese”; 17.6 percent as exclusively “Taiwanese”; and nearly half said both Chinese and Taiwanese.

But by 2014, only 3 percent still identified exclusively as Chinese — and more than 60 percent Taiwanese, hovering around there ever since. Today, only one-third of Taiwan’s residents think of themselves as both Chinese and Taiwanese. Among those who are 29 or younger, born after martial law ended in 1987, 78 percent hold an exclusively Taiwanese identity — as do nearly 70 percent of people younger than 40. If this trend continues, a solely Taiwanese identity will prevail as residents’ consensus. 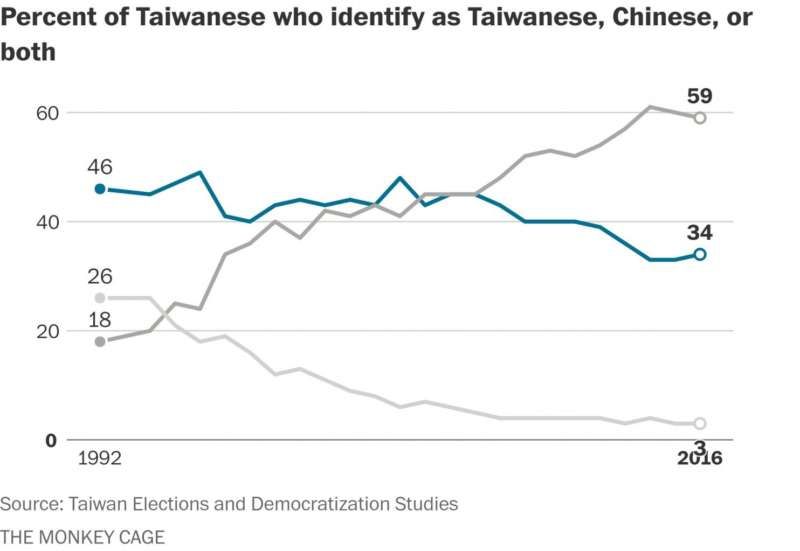 2. However, de jure independence will only be “charged forward” when some conditions are met

For the past decades, Emerson Niou, a political scientist at Duke University, has administered a series of questionnaires to Taiwanese citizens by randomized telephone interview (conducted by the Election Study Center of the National Chengchi University). These surveys revealed that about three-quarters of the respondents would support Taiwanese independence if it would not cause the PRC to attack Taiwan. Put differently, survey evidence shows that most Taiwanese may see formal independence as their ultimate goal, not simply the ability to “function with some degree of autonomy,” as Obama stated.

For Taiwanese younger than 40, pro-independence support reaches 84 percent. Perhaps most startling, 42.6 percent of the under-40 generation would support independence even if it meant China would attack Taiwan under the risk of war.

On the flip side, unification with China has become unpopular. Even under the most favorable scenario — in which there would be little political, economic or social disparities between mainland China and Taiwan — only one-third of Taiwanese citizens say they support unification. That’s a significant drop from the 60 percent who supported unification in 2003.

And yet the Taiwanese are not willing to pursue independence at all costs. Many are concerned with the economy. When asked to choose between formal independence or maintaining economic ties with China, 82.6 percent chose bread over romance. Moreover, 64.4 percent worry that China will force Taiwan to accept political concessions via economic connections. That has increased from less than a quarter since the two sides lifted the official trade ban in 2008, as you can see in the figure below. 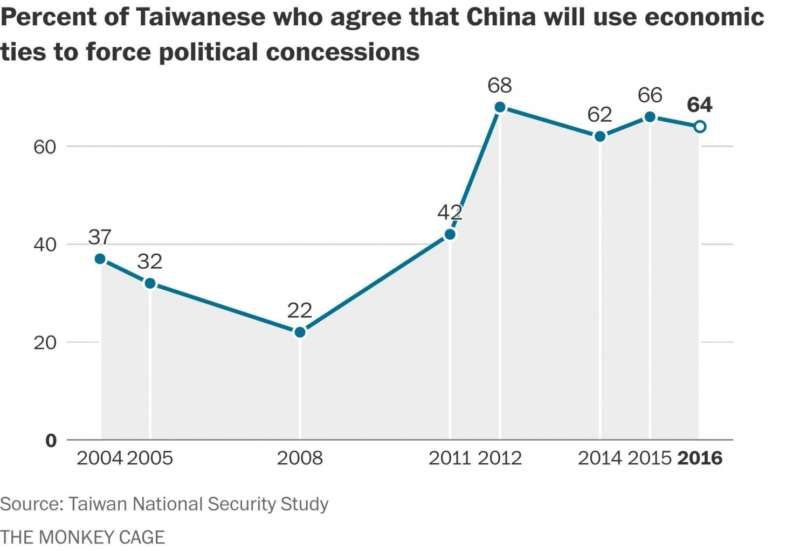 3. Taiwan is a fully functioning democracy

Taiwan is a well-functioning democratic society that recently elected its first female president and has achieved its third democratic turnover of power. By any measure of democratization, such as the “two turnover test” or indicators measured by the Freedom House and other institutes, Taiwan is a fully consolidated democracy — according to some, the only democracy in the Chinese-speaking world. With a marriage equality bill moving through the legislature, Taiwan has a chance to become the first Asian country to legalize same-sex marriage in 2017.

Mainland China is not. There, a new Overseas NGO Management Law took effect as of Jan. 1, tightening government controls over domestic civil society. Even international democracy activists have been targeted, as when the state forced Swedish activist Peter Dahlin to confess to crimes against China on state television.

The “status quo” between China and Taiwan is never static. How Taiwanese people perceive the relationship necessarily constrains the political position of Taiwan’s democratically elected leader. As a result, understanding Taiwanese perceptions is essential in navigating the delicate relationship among Taiwan, China and the United States.