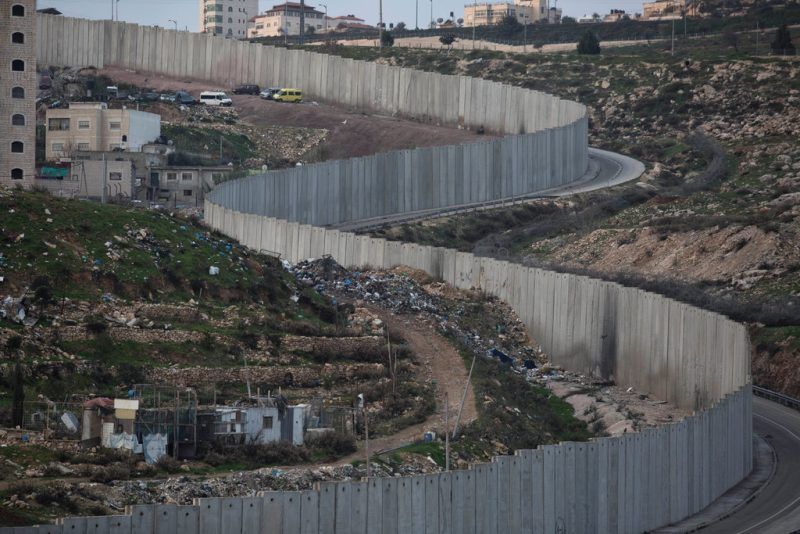 The Israeli-Palestinian conflict in its post-1967 incarnation has been raging for nearly 49 years, with no solution in sight. Several Israeli prime ministers, including Ehud Barak and Ehud Olmert, made great efforts to reach a permanent agreement, only for the Palestinians to decline, while Ariel Sharon’s unilateral withdrawal from Gaza was met not by peace and quiet, but by rockets and terror tunnels. The terror wave of recent months, in which Israeli civilians have been victims of stabbings, shootings and car attacks, has further eroded the faith of Israeli moderates in the prospects of attaining peace.

All of this has served as an excuse for Prime Minister Benjamin Netanyahu to make no substantial progress in working toward a two-state solution. Meanwhile, President Mahmoud Abbas, the Palestinian Authority leader, is Mr. Netanyahu’s mirror image, also doing nothing.

A majority of Israelis see a two-state solution as the only feasible way to end the conflict and retain Israel as both a Jewish and a democratic state. But for good reason, a majority of Israelis also see this as unrealistic right now. The hatred and distrust between the two peoples, fueled by extremists on both sides and compounded by the reluctance of leaders in Jerusalem and Ramallah, has forced me to conclude that a breakthrough toward an agreement is not foreseeable.

The standstill threatens to lead to the formation of a binational, one-state reality with two warring nations perennially at each other’s throats. Such a situation would suit the Israeli far right, which wishes to annex the West Bank along with its inhabitants. It would also serve the interests of those Palestinians who seek the demise of the Jewish state. But the lack of progress will destroy the aspiration of the moderate majorities on both sides.

It’s time to look reality in the eye: Continuing on the same path will not only fail again but will further erode Israelis’ and Palestinians’ faith in a two-state solution, convince the Palestinians that they can achieve statehood without negotiating and provide oxygen to the enemies of peace on both sides.

That is why last month I introduced an interim plan that was overwhelmingly endorsed by my party’s conference. The plan reaffirms our strong commitment to a two-state solution by way of calling for immediate political and security measures, namely, the separation of Israelis and Palestinians. This, along with other steps I have proposed, will generate the climate necessary for productive negotiations in the future.

The largest settlements, known as settlement blocs, are adjacent to the 1967 lines, constitute a tiny percentage of the West Bank’s territory and hold the vast majority of settlers. These are essential to Israel’s security. Most stakeholders accept that they will remain part of Israel in any permanent peace agreement, in return for land swaps. The security fence currently being built around these blocs should be completed, yet with allowance given to ensure the territorial contiguity of Palestinian lands and prevent the isolation of Palestinian villages.

Twenty-eight Arab villages to the north and east of Jerusalem must be physically and politically separated from the city’s municipal boundaries, leaving a unified, strengthened capital. This would also mitigate the spate of Palestinian knife attacks that have originated in no-man’s-land neighborhoods and are facilitated by free access into the city.

Beyond the major settlement blocs, Israel should stop settlement activities and remove outposts that are illegal under Israeli law. We should also transfer civilian powers and responsibilities to the Palestinian Authority. This will empower it, improve its ability to counter terrorist activities in the West Bank and facilitate institution building. The Israeli military will remain the only army in the territories up to the Israel-Jordan border.

A regional security conference, including those nations with whom Israel shares mutual interests, such as Egypt, Jordan, Saudi Arabia and the Persian Gulf states, should be convened in order to formulate a plan to defeat the spread of extremism and terrorism emanating, separately, from the Islamic State and Iran. Such a conference, focused on our shared goal of defeating these twin threats, would help build the trust and working relationships necessary for future collaboration on an Israeli-Palestinian agreement.

Additionally, we must address the issue of Gaza. The goal should be to establish a long-term cease-fire, an integral part of which must be preventing the armament of Gaza and incentivizing its demilitarization. The Palestinian Authority should be part of this deal, and regional partners must help with Gaza’s economic development. Israel will maintain its right to take action when terrorist organizations develop infrastructure aimed at harming our civilians, such as terror tunnels.

This is essentially an emergency plan. A negotiated two-state solution remains the goal of Israel’s Zionist Union, but in the meantime we cannot and should not sit by idly. We must build trust. We must take measures toward having each nation dwell in its own territory, stopping terrorists and generating economic development and governance in the Palestinian territories. We must isolate those who work against the interest of peace and show the Palestinians a route to a better life, while creating a de facto two-state reality.

Polls show that our separation plan has earned the support of over 65 percent of Israelis. At the end of the road, a negotiated two-state solution, recognizing Israel as the nation state of the Jewish people and Palestine as the nation state of the Palestinian people, remains the only way in which both sides can realize their aspirations. For this to be achieved, the process of managed separation must begin now.

Isaac Herzog is the leader of the opposition in Israel’s Knesset and chairman of the Zionist Union and the Labor Party.