China has more than 26,000 large dams, more than the rest of the world combined. They feed its insatiable demand for energy and supply water for mining, manufacturing and agriculture.

In 2011, when China was already generating more than a fifth of the total hydropower in the world, the leadership announced that it would aim to double the country’s hydropower capacity within a decade, so as to reduce its heavy dependency on coal-fired power plants. Since the waterways of mainland China are already packed with dams, this new hydropower output could come from only one place: the rivers of Tibet.

Rivers gushing through deep canyons at the edges of the Tibetan plateau hold the highest hydropower potential in the world. The headwaters of seven major rivers are in Tibet: They flow into the world’s largest deltas and spread in an arc across Asia. 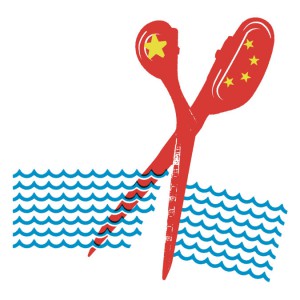 Two of the continent’s wildest rivers have their sources in Tibet: the Salween and the Brahmaputra. Though they are under threat from retreating glaciers, a more immediate concern is Chinese engineering plans. A cascade of five large dams is planned for both the Salween, which now flows freely, and the Brahmaputra, where one dam is already operational.

The damming does not benefit those who live in Tibet. The energy generated is transferred to power-hungry industrial cities farther east. Tibetans are forcibly deprived of their land; protests against hydropower projects are prohibited or violently dispersed.

Even more alarming are projects to divert the waters of Tibet’s rivers for use in mines, factories and other industries. At the eastern edge of Tibet, a planned mega-diversion from south to north would move water from the Yangtze to the Yellow, China’s two greatest rivers. Other plans call for diversion of water from the Brahmaputra, Salween and Mekong — all rivers that cross national boundaries. Including China itself, up to two billion people downstream from Tibet depend on these rivers. Damming and diverting them will have a severe impact on their lives and environment, especially when you consider that rice and wheat require water-intensive cultivation.

Rivers support entire ecosystems. They carry tons of nutrient-rich silt downstream, a cocktail of elements needed for growing plants: nitrogen, phosphorus, potassium, magnesium and calcium. Silt is essential for agriculture and for bolstering the deltas against rising sea levels. Dams block silt, and they block fish migration. The Yangtze is China’s biggest freshwater fishery, but since the Three Gorges Dam that spans it was completed in 2012, the downstream population of carp has fallen by 90 percent, according to Guo Qiaoyu of the Nature Conservancy in Beijing.

Vietnam, Cambodia and Bangladesh heavily depend on rivers sourced in Tibet. More than 60 percent of Cambodia’s annual fish catch derives from Tonle Sap, a lake that is replenished by the annual flooding of the Mekong. Over the last decade, as new Chinese dams have come online on the Mekong, the fish catch has plummeted. The waters rise and fall at the whim of Chinese engineers.

Then there are the direct human costs of damming and diverting: Whole communities must be relocated from areas flooded by a reservoir. They are often shifted to degraded land, where they live in poverty or have to relocate once again. By some estimates, hydropower projects have forced some 22 million Chinese to migrate since the 1950s.

In Tibet, since the 1990s, at least a million nomads and farmers — a sixth of the population — have been relocated from grasslands to make way for mining ventures and hydropower projects. These “ecological refugees” are shunted into ghettos. Moreover, China claims complete sovereignty over Tibet’s rivers, oblivious to protest from Tibetans and from the people downstream.

The United Nations has done too little, too late. In 2014, the Watercourses Convention came into effect, spelling out guidelines for transboundary water sharing, but it is nonbinding. More to the point, China is not a signatory — and neither are most nations of South Asia.

This will end badly for the nations downstream from Tibet, which are competing for scarce water. Damming and water diversion could also end badly for China, by destroying the sources of the Yangtze and Yellow Rivers.

The solution to these complex problems is simple: Since these enormous projects are state-run and state-financed, China’s leaders can cancel them at will. Though campaigns by Chinese environmentalists have stopped some dam projects, the pro-dam lobby, backed by Chinese consortiums, is powerful. There are alternatives to disrupting the rivers: China has made great investments in solar and wind power, but has not significantly deployed them in Tibet.

China’s leaders need to consider the costs of forging ahead with these projects. The health of these rivers is of vital concern to all of Asia.

Michael Buckley is the author of Meltdown in Tibet: China’s Reckless Destruction of Ecosystems From the Highlands of Tibet to the Deltas of Asia.