In May, a U.S. Navy SEAL was killed and two other U.S. service members were wounded on Somali soil. It was the first U.S. combat death in the East African country since 1993 — and it came amid ramped-up efforts to fight the deadly extremist group al-Shabab.

For years, Boko Haram has carried the dubious distinction of being Africa’s deadliest terrorist group. But a multinational task force has weakened the group. It has been crippled so badly that al-Shabab has emerged as Africa’s deadliest extremist group.

That is according to a report by the Africa Center for Strategic Studies published in April. Based on that report, Quartz and Newsweek ran stories last month exploring exactly how al-Shabab surpassed Boko Haram in lethality.

But is al-Shabab really more lethal than Boko Haram? We disagree.

A closer look at the data suggests, however, that it might be too early to pass the “deadliest group” mantle to al-Shabab.

ACSS based its conclusions on data from ACLED, the Armed Conflict Location and Event Data Project. But on the basis of the same data set, our analysis found that Boko Haram remains Africa’s deadliest terrorist group — and that al-Shabab killed a fraction of the victims reported by ACSS.

How could our conclusions be so different?

To understand how such a discrepancy might arise, it is important to consider what ACLED does and does not do. ACLED tracks incidents of violence across Africa and Asia. It draws its data from reports from news organizations, governments, nongovernmental organizations and published research.

ACLED codes entries by type (for example, battles, riots, protests and violence against civilians). It also identifies primary and secondary actors. It does not, however, label actors as terrorists or events as terrorism incidents. Here is how ACLED describes its approach in an overview of its methodology:

ACLED does not categorize clusters or campaigns of events, largely because political violence, protest and conflict are aggregations of multiple actors, attacks, goals, etc. To classify events as discrete acts in an ‘insurgency’ or ‘terrorism’, ‘civil war’ or ‘livelihood conflict’ is often a reductive choice, leaving out the complex ways in which conflict creates multiple scales of violence and intended outcomes within a territory.

Since ACLED declines to decide which incidents count as terrorism, those who use its data must interpret that data to draw conclusions about terrorism trends. ACSS decided to tally fatalities in which al-Shabab is listed either as the first or second actor. We decided to include only cases in which it is the first actor.

Here is why we counted the way we did

Which approach is best? Obviously, that is a judgment call. We believe that counting first and second actors significantly overestimates the deaths caused by al-Shabab and other terrorist groups.

Most incidents in which al-Shabab is the second actor — 73 percent — are battles with military forces, usually the African Union Mission in Somalia. That raises two questions:

By counting only incidents in which al-Shabab is the first actor, our analysis greatly de-emphasizes military altercations.

In its guide for the media, ACLED cautions against using its data to determine how many people a particular group has killed, because it does not specify which group suffered casualties in an incident with two actors — except in cases of violence against civilians. 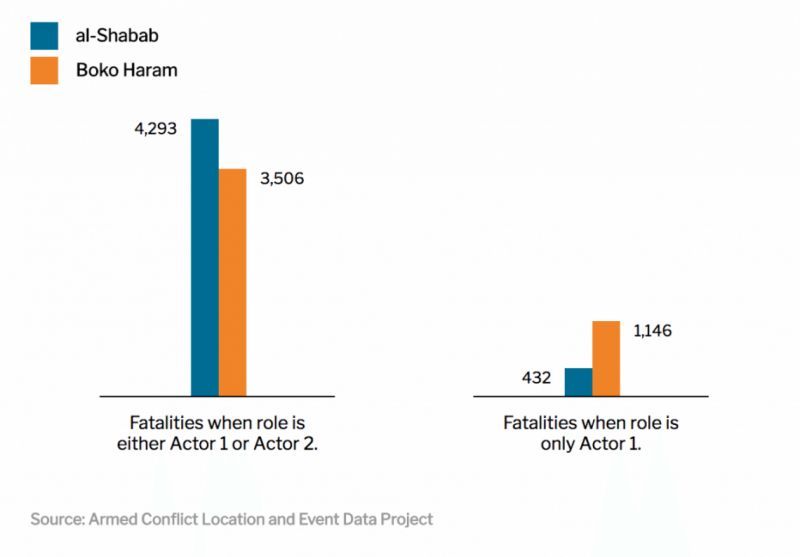 When analyzing military incidents, it is important to consider which side of a battle suffered fatalities. ACSS concludes that al-Shabab caused 4,281 fatalities in 2016, a total that can only be reached if we count all military fatalities as deaths of al-Shabab forces.

But the ACLED numbers suggest otherwise. For example, ACLED reports that there were 235 deaths by remote violence in clashes between the U.S. military and al-Shabab. ACSS’s tally works only if all of those fatalities involved al-Shabab killing Americans. Since the U.S. service member’s death in May was the first American military death in Somalia in 24 years, all 235 fatalities had to have been Americans killing al-Shabab members.

In the modern news cycle, suspect data can spread all too quickly. Soon after Quartz ran its story, Vice published a report of its own about al-Shabab’s having become Africa’s deadliest terrorist group. Recently, The Washington Post cited Newsweek’s story in its analysis of al-Shabab’s strength and resilience.

This month, Secretary of State Rex Tillerson assured Somalia that it had the United States’ full support in the fight against al-Shabab and extremism, according to a statement from Somalia’s Ministry of Information, Culture and Tourism.

Researchers must be transparent about data collection and analysis methods and cautious when drawing conclusions about broad trends. Our pronouncements can sometimes sway foreign policy.

Salem Solomon is a digital journalist at the Voice of America’s Africa division and covers the latest news from across the continent.
Casey Frechette is an assistant professor in the department of journalism and digital communication at the University of South Florida St. Petersburg.