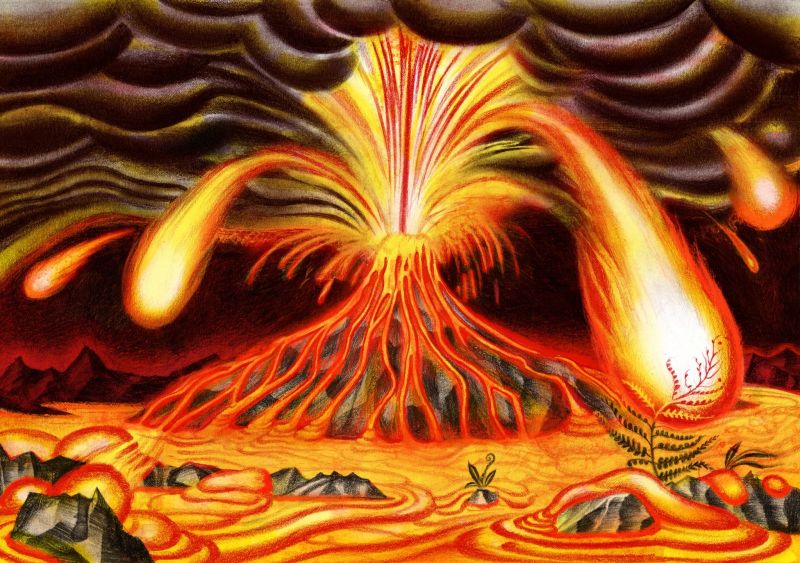 It has been called the “Great Dying.”

The planet’s most profound catastrophe struck 252 million years ago, at the end of the Permian period, killing 90 percent of life in the ocean and 75 percent on land. The fossil record nearly goes silent and remains startlingly impoverished for millions of years: trees disappear, bacteria replace coral reefs, insects hush. What looks like fungus spikes in the fossil record, perhaps the sepulchral rot of a dying world.

It was as close as earth has ever come to being sterilized altogether, and would take 10 million years for the planet to fully recover, setting the stage for the eventual rise of the dinosaurs.

“The End-Permian mass extinction is unique in earth history,” said Seth Burgess, a geologist with the United States Geological Survey. “Nothing else is as severe, and it’s not even close.”

A growing body of evidence suggests that this ancient apocalypse was brought on, in large part, by gigantic emissions of carbon dioxide from volcanoes that erupted across a vast swath of Siberia. Today the consequence of quickly injecting huge pulses of carbon dioxide into the air is discussed as if the threat exists only in the speculative output of computer models. But, as scientists have discovered, this has happened many times before, and sometimes the results were catastrophic.

This month the journal Palaeogeography, Palaeoclimatology, Palaeoecology published a special issue that explores a growing body of evidence that past volcanic releases of carbon dioxide may have helped drive many of the most extreme die-offs in earth history.

While cautioning that there may have been other killers involved in these Armageddons, as well, the paleontologist David Bond and the geologist Stephen Grasby write in the journal that most mass extinctions were marked by “global warming, anoxia and ocean acidification, driven by changes in atmospheric CO2.” After synthesizing a vast body of literature and reviewing almost 20 global mass extinctions over the past half billion years — including the most extreme ones, the so-called Big Five — the authors concluded that “large scale volcanism is the main driver of mass extinctions” and that “most extinctions are associated with global warming and proximal killers such as marine anoxia.”

The journal’s special issue reflects a research community that, failing to find asteroid impacts at the crime scenes of many of the planet’s worst prehistoric calamities, has turned its attention away from the sky and toward homegrown killers.

Today, in the lonely reaches of Siberia, piles of ancient basalt stack up, in places, miles thick. During the height of the End-Permian mass extinction 252 million years ago, this lava would have covered millions of square miles of what was then the supercontinent Pangaea. But it wasn’t simply the lava that nearly exterminated life on earth.

As the work of Dr. Burgess documents, when this magma started spreading into the shallow crust of Siberia, it intruded into one of the world’s largest coal basins, cooking huge deposits of carbon-rich rocks. The superheated fossil fuels then ruptured at the earth’s surface in spectacular gas explosions, as documented by a team led by the Norwegian geologist Henrik Svensen.

Though volcanoes in Siberia had already been erupting for around 300,000 years, Dr. Burgess’s work indicates that it wasn’t until the magma started burning through fossil fuels on a colossal scale that the mass extinction began. The carbon dioxide was delivered to the atmosphere just as effectively as by any coal-fired power plant or minivan muffler today.

In the resulting chaos, as temperatures rose and life died in the acidifying, oxygen-starved oceans, the planet nearly lost its pulse. I asked Dr. Burgess what a time traveler visiting the End-Permian earth would have experienced. “It would be hot and it would be terrible,” he said, laughing.

Though the asteroid that would wipe out the dinosaurs 186 million years later might get more attention, the Great Dying dwarfs that catastrophe in destruction. It brought about the end to a less well-known but similarly fascinating, and much older world — a supercontinental wilderness stocked with an odd collection of uncanny pre-mammal forbears and, in the seas, an archaic hallucination of shells and tentacles that had prevailed since the dawn of animal life.

Today humanity plays the role of that primeval Siberian supervolcano, burning through the world’s ancient stores of carbon, long buried underground in the form of oil, coal and natural gas. Though there were likely other killers afoot in the Great Dying — like ozone-destroying halocarbons, acid rain and a heavy dose of toxic heavy metals raining from the volcanic smog — it was the chemistry-warping pulse of carbon dioxide that has attracted the most suspicion for its role in nearly ending the world. And we have only to look at the modern ocean to see why.

Excess carbon dioxide reacts with seawater to make it inhospitable to the animals that use carbonate to build their skeletons. Our modern oceans have already become 30 percent more acidic since the start of the Industrial Revolution, and the shells of fluttering planktonic snails — which form a foundational part of the food web in the Antarctic and the Pacific Northwest — have been found pitted with holes in our newly souring seas.

By 2050 the Southern Ocean will no longer be able to host those creatures, which also form a critical part of the diet of salmon. Acidification will also doom, perhaps by midcentury, the already ailing coral reefs that host 25 percent of the ocean’s biodiversity. And the world’s shallow oceans are losing oxygen as the planet warms and nutrient pollution pours in from agricultural heartlands and urban watersheds. Paleontologists have seen all these changes before.

It’s still an open question what will result from our continuing chemistry experiment with the planet, but the history of mass extinctions counsels extreme caution.

Luckily, we’re still a long way away from an End-Permian level mass extinction, though some paleontologists warn that a few more centuries of environmental excess may well get us there. But you don’t have to get all the way to the apocalypse before life begins to get markedly less comfortable.

Even before the United States’ harebrained exit from the Paris climate agreement, the planet was well off course from its 3.6-degree Fahrenheit (2-degree Celsius) target for 2100. We’re currently on pace for about 7.2 degrees Fahrenheit (4 degrees Celsius) of warming by the end of the century, a temperature that at times in the past has meant no ice at either pole. But the calendar doesn’t stop at the end of the century, and continued warming beyond that will begin to make parts of the planet uninhabitable for mammals like ourselves, because of the dangers of heat stress. And, as the bleaching of the Great Barrier Reef shows, the oceans are already struggling to adapt to a warmer, more acidic world.

Though the Great Dying was truly extreme, and likely included some stresses beyond the scope of humanity’s armamentarium, we have emerged as a formidable geological force in our own right as we continue to tweak and warp the complex earth systems that sustain life.

“The rate at which we’re injecting CO2 into the atmosphere today, according to our best estimates, is 10 times faster than it was during the End-Permian,” the paleoclimatologist Lee Kump, dean of the College of Earth and Mineral Sciences at Penn State, told me. “And rates matter. So today we’re creating a very difficult environment for life to adapt, and we’re imposing that change maybe 10 times faster than the worst events in earth’s history.”

Peter Brannen writes about science and is the author of The Ends of the World: Volcanic Apocalypses, Lethal Oceans, and Our Quest to Understand Earth’s Past Mass Extinctions.