For more than four centuries, from the Fourth through the Sixth Dynasty, most Egyptian kings and many queens were interred in pyramid tombs. Beginning in the Predynastic Period, Egyptian tombs evolved from a simple mound marked with stones, to a mastaba constructed of brick or stone, and finally, at the dawn of the Third Dynasty, to the monumental stairway of Djoser's Step Pyramid. Interpretation of the symbolism of this progression is difficult but the following theories can be proposed.

The Tomb as an Image of the Terrestrial World

The landscape changes profoundly as one moves from Memphis, the ancient Egyptian capital, to its necropolises, Saqqara and Giza, toward the setting sun to the west. The Nile Valley, its rich vegetation humming with life, must be left behind to reach the realm of the dead, which lies in desertlike solitude on a silent plateau. This separation between the world of the dead and that of the living is expressed in the funerary architecture: a subterranean chamber is reserved for the mortal remains, while a superstructure with a clearly visible chapel or funerary temple evokes the house or palace frequented by the living.

The pyramid is the most spectacular element in a vast ensemble including, on the level of the Nile Valley (the domain of the living), a funerary port on a branch of the great Memphis canal. A valley temple, which lies at the port's center, provides ramps for landing and for access to the necropolis (fig. 11). A long covered cause-way rises to the world of the dead on the plateau's summit, where the cult temple is located adjacent to the pyramid's east side (fig. 12). Some ancillary installations complete the royal funerary complex. The function of a small pyramid to the southeast, enclosed within its own precinct, remains uncertain, but it may have had some connection with Upper Egypt. Sacred boats for the use of the deceased were buried in long pits.

The monuments of officials and royal relatives were grouped around the pharaoh's tomb. The well-ordered layout of the royal necropolis, with its different sectors, organized into street grids, expressed the social organization of the court. During the reign of the Fourth Dynasty king Khufu the more modest queens' pyramids came to be located near that of the king. The queen's tomb, which included a small cult temple, was a simplified version of the king's monument. The mastabas of privileged functionaries, some associated with the royal family, were organized as groups of funerary houses. These had the two components essential to a tomb: an underground burial chamber (with an access shaft) and an above-ground ensemble, which included a cult chamber for offerings, a serdab containing the statue of the deceased, and a suite of decorated rooms, which increased in number into the Sixth Dynasty (see "The Tombs of Officials" by Peter Jánosi in this catalogue).

The social hierarchy of the court that persisted beyond death is revealed clearly only in Fourth Dynasty cemeteries at Dahshur and Giza and to a lesser extent in the Sixth Dynasty cemetery at Saqqara near the pyramid of King Teti. The exceptional honor of having a tomb in the royal necropolis offered nonroyal persons the hope of achieving individual survival as well as retaining their courtly offices in the beyond. Over time, distinctions became obscured by later burials whose sites were chosen to secure the protection of still-prestigious monuments.

The Tomb as a Locus of Remembrance

The essential activity of the funerary cult, the presentation of offerings for the dead, testifies not only to the obligation of the living to remember but also to the hope of survival in the beyond. Only the deceased are immortal, since they have been called to eternal life and cannot die again. Remembrance, however, must still be sustained. Thus each of the majestic pyramids commemorates the earthly past of a dead king, while glorifying his mummy's resting place.

The tomb is a monument where the eternal past looks toward the future through a continuous present. The transition from mud brick to hewed stone exemplifies this movement toward immortality, also evident in the increasing size of the monuments.

Pyramid construction was not without risk, and in the Fourth Dynasty, particularly during the erection of the three large pyramids of King Snefru, many schemes were devised to keep the burial chamber from collapsing under the pyramid's weight. Numerous spanning systems were employed in the extraordinary tomb of Khufu: juxtaposed lintels in chamber three (King's Chamber); a corbeled ceiling in the area where the closing blocks were stored (Grand Gallery); and the chevron, or pointed saddle, vault, an innovation that was used above the entrance and in chamber two (the so-called Queen's Chamber). The last, which shows a growing understanding of the dynamics of load bearing, came to be widely used.

The plan of the subterranean royal funerary apartment was standardized by the Fifth Dynasty. The essential elements, which henceforth did not vary, were a descending access, a horizontal corridor, a funerary chamber situated beneath the pyramid's center, and elaborate protective mechanisms.

The Tomb as a Framer of Eternity

Beginning in the reign of Unis, the final sovereign of the Fifth Dynasty, Pyramid Texts were inscribed on the walls of the royal funerary apartments. These texts, which include statements of religious beliefs, magical spells, and incantations, helped the pharaoh in his passage through the underworld to eternal bliss. The Egyptians believed that rebirth could be achieved through three primary avenues (they were not disturbed by the inherent contradictions among these, as the heirs of Aristotelian logic would be). In Osirian eschatology the deceased reaches the world of the dead, a mysterious kingdom, ruled by Osiris as the Lord of the Westerners, from which no one ever returns. In the solar cosmology the pharaoh is reborn each morning and accompanies the sun in his bark across the sky, disappearing with the sun but reemerging with it at dawn. Alternatively, the pharaoh rises north-ward at night to rejoin the abiding stars that endlessly circle the pole, giving undying light.

Architecture evolved to support these strivings for resurrection. Beginning with Djedefre, Khufu's successor, after the priests chose the pyramid's location, a huge T-shaped trench was cut into the rock of the plateau. The leg of the T became the access corridor to the funerary chambers, while the crossbar, with its east-west orientation, held the antechamber and burial chamber. Construction of this funerary apartment was accomplished while the trench was open to the sky. Thick stone slabs were placed on a layer of packed sand to form a pavement; then the stone walls of the chambers and corridors were built; finally, a vault of huge stone chevrons was put in place, supported by two opposite sides of the trench. From the reign of Unis onward, the roof's interior was decorated with stars, conjoining death and the cosmos. The sarcophagus was put in place before the vault was completed. These chambers were then buried under the pyramid's mass. After the burial of the king, the participants made the long ascent from the funerary apartment; they returned to the land of the living through a ground-level chapel at the center of the pyramid's north face. This journey paralleled the ascent of the soul of the deceased to the polar stars. Once the king was interred, no one ever again entered the pyramid, and the rituals due the sovereign were held only in the temple and its precincts.

From the Fourth Dynasty forward, architects chose an east-west axis for the cult, or pyramid, temple, paralleling the sun's path through the sky. After passing through the entry gate, the priests who celebrated offering rites moved through the hall, the great court, and a number of other chambers before reaching the innermost temple with the statue room and the sanctuary. In the holy of holies was a granite stela, placed to allow the spirit of the deceased in the pyramid to enjoy the offerings made for it. Over time, magazines for cultic goods multiplied, contributing to the isolation of the hallowed spaces from the exterior world.

Set apart on a plateau bordering the Nile Valley, the world of the pyramids escaped to some extent the vicissitudes of the passing centuries. The excellence of their architecture allowed the Egyptians, who were bent on a quest for immortality, to realize their obsessive goal: the conquest of time, the triumph over forgetful-ness, and the attainment of eternity in the memory of future generations. 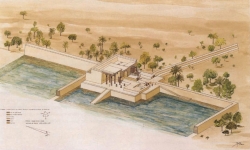 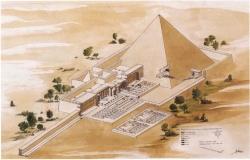