When Van Eyck or Titian painted the portrait of a bourgeois or grandee of his day, several factors entered into the composition of the picture: the painter's own personality, the patron's desire to be depicted more or less realistically, and a third consideration of which neither was completely aware—the political, economic, and geographic conditions in which they lived. The influence of each of these factors is what makes the portraits of Van Eyck and Titian, as individual as they are, recognizably different from each other. When an Egyptian sculptor decorated the walls of a mastaba with the likeness of a dignitary—someone who had attained sufficient status and wealth to commission a tomb with relief decoration—the same three factors doubtless also entered into the equation and could involve in turn the artist's vision, the subject's expectations, or the atmosphere of their times.

After the pharaoh himself, the owners of mastabas embodied the human ideal in the Old Kingdom. It is possible to determine what the concept of the individual was in this era by examining several aspects of the human figure as it appears in relief.

The interest in facial features, or realistic portraiture. To the extent that portraiture, as we understand it today, existed at all in royal sculpture during the different periods of Egyptian history1 we may reasonably ask if it might not have existed in nonroyal images as well. The only way to assess the degree of realism that sculptors of the Old Kingdom achieved in the depiction of faces is to note whether a particular facial feature is limited to a single representation or is common to all those in the tomb.

Facial expressions. These are another index of individual personality or social groups.

Stature. This is clearly the feature that changes the least in Old Kingdom reliefs, in contrast to sculpture in the round, where there is a world of difference between a wood statue of Meryre-ha-ishetef (Sixth Dynasty)2 and the Sheikh el-Beled (probably Fourth Dynasty; fig. 34),3 the former with its fluid, almost feminine—in fact, mannerist—pose and the latter with its characteristic stoutness and nascent hyperrealism. Even in relief, however, subtle differences reflect the transition from one reign to the next.

The interest in anatomy, or modeling, in the outline of a human figure as well as its surface.4 Since the face and legs almost always present a minimum of relief, it is appropriate to speak of an interest in anatomy only when the modeling extends to other parts of the body.

Only first-rate monuments for which we also have photographs of the same level of quality allow us to appreciate these numerous stylistic variations.5 To complete the picture of the masculine and feminine ideals in the Old Kingdom, it is also a good idea to complement the study of style with a consideration of the variations that occur in the layout of portraits of couples.6 These variations doubtless have more to do with the evolution of conventions for portraying the human figure than with the evolution of the society's mentality, but they help to re-create the image of a society, just as portraits of couples or groups do in Dutch painting of the seventeenth century.

Not all of the nonroyal monuments of the Old Kingdom have yet been precisely dated.7 For that reason, the sketch that follows, done in rather broad strokes, should be considered incomplete and provisional. For the purpose of this discussion I have adopted a chronological approach, from the Third through the Sixth Dynasty. 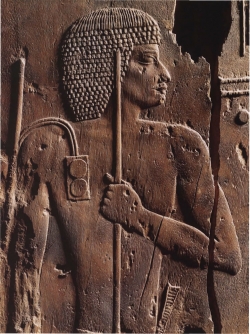